Ah! My Goddess! The Movie

Starring a bunch of Japanese or English voice-over actors, depending on which dub you'd prefer to listen to.

Running time: I don't know. How slack of me.

Okay, so from the outside of it, I wouldn't say I'd be the kind of person to enjoy Ah! My Goddess!, whether that be the 1993 television series or the movie version of the same name. I'd seen Sailor Moon on TV and  leaving aside all the complexities and mature themes that were hacked from the original version to make it "safe" for American television  I didn't particularly care for it. Too hyperactive. Too shallow. Toogirly. I pretty much figured that Ah! My Goddess! would be ripped from the same mould, and, you know, it sorta is.

But it's not like that's an entirely bad thing, because it's really enjoyable. Having never watched a single episode of the series, I was able to step into the previously established storyline with a certain degree of ease, with only a few details here and there needing the clarifying touch of Internet research to help me understand. Basically, the back-story is this: Keiichi, a college student, somehow meets this angel/goddess by the name of Belldandy, who offers to grant him one wish. His one wish is that Belldandy stay with him, cause heya knowkinda likes her. Anyway, somewhere along the line they fall in love, move in together (along with her little sister Skuld and her friend Urd), have adventures. . . and join a motorcycle club or something. That's what I managed to work out, at least.

The movie picks up after the series, with Keiichi and Belldandy very much in love, and with everything going swimmingly well. Trouble arrives, however, in the form of Celestin, Belldandy's former mentor and recent prison escapee. It seems he has plans for Belldandy and for Earth, and nothing's going to stand in his way.

I will say this: As accessible as the back-story is, the actual story is a tad confusing. I have a feeling, however, that it has a lot to do with the difficulties of translating the film from Japanase to English. I don't mean this in the sense of the language itself  although some of the dialogue does have that overly speech-like quality that a lot of anime has  but more in a cultural context. Some things just don't translate well. 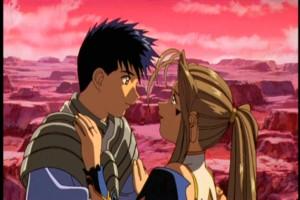 It's a testimony to the strength of the movie that, despite however confusing the plot may be, despite the fact that I knew nothing of the series beforehand, I still found myself really enjoying the film. The movie has an energetic sense of humour to it that starts everything off strongly and bubbles up throughout, but it also manages to tie that in with a truly sincere love story. The relationship between Keiichi and Belldandy is, at times, charming, warming, and heartbreaking. At one point, a metaphor for the state of their relationship is used that strikes you both with how clever the film is, but also how much you want to see things work out for these two kids. That's called emotional investment, baby, and that's when you've got your audience hooked.

I know that if I had a kid (and we're talking a big if' here, people) and I wanted to get her/him something to watch that I could watch along, I'd get this in a heartbeat. I know it's not cool to dismiss animation  and certainly not anime  as kid's fare, but that's not what I'm doing here. Ah! My Goddess! is a film that can be enjoyed on a number of levels, so why not share that with someone who'll really get a kick out of it?

This movie is hyperactive, girly, but certainly not shallow - I like it just fine.

Next week: Something with guns. Reassert my masculinity. *Spit*