This week, a slight change in format as we make a heartfelt plea from TV land.
By Steven Lochran
2014-09-29

There seems to be a trend in television of top quality programmes being cancelled before they've really had a chance to prove themselves. Probably the worst perpetrator of this is American station Fox, which has cancelled everything from Freaks and Geeks to Dark Angel to Tru Calling to Firefly to Family Guy. The last two cases are probably the most damning. Firefly was cancelled after only thirteen episodes, but when it was released on DVD it had huge sales, Fox executives quickly realized the blunder they had made. In hopes of cashing in on the success they didn't even know they had, the Fox executives commissioned a movie that is now due to be released at the end of the year. Essentially the same thing happened with Family Guy: The show was cancelled, proved itself a hit on DVD, and then was subsequently brought back for a new series. 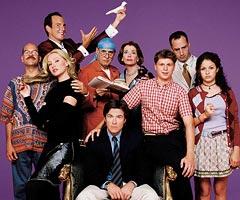 Why am I discussing all this? Well, it seems despite these obvious examples of the Fox network zealously and prematurely cancelling their shows only to turn around and breath second life into them when they've realized the mistake they've made, they seem poised to do it again. Too bad it's with one of the funniest and most original shows on television. Of what show do I speak? Why, Arrested Development, of course!

To use the show's own opening monologue, Arrested Development is "the story of a wealthy family, who lost everything, and the one son who had no choice but to keep them all together." Basically, when the patriarch of a rich family is arrested for treason (yes, treason), it's up to his oldest son to make sure both the family and its company stay afloat. When it's boiled down like that, it sounds like some kind of melodrama, but it's actually a sharp and quite offbeat comedy.

Shot in a documentary style, what makes Arrested Development so funny is its mix of ludicrous situations and utterly earnest characters. In addition to the comical situations the writers cook up, they also deliver some absolutely wicked one-liners that work on multiple levels. When you couple that with a seasoned cast that's overloaded with talent, you have a show that really clicks. That's why it's so unfortunate that Fox is messing around with it, with persistent timeslot bumps and the ever-looming threat of cancellation. The show's win at last year's Emmys for best comedy series seems to have given it a short reprieve, but God only knows how long that'll last.

Hence the reason for this column. If you live in America and aren't already watching Arrested Development, I implore you to tune in now. If you like it, tell your friends to check it out. Also, if you want to get caught up, there's no better way than to buy the first season DVD set, which has just been released.

For the rest of us around the world, I suppose we just have to sit and wait and hope we get to see as many episodes as possible. Here in Australia, the series was aired as a late-night time-filler in the summer non-ratings period, before being unceremoniously pulled midway through its first season. Hopefully, when it returns, the show will be in prime time, with a big ad push, because the network will have seen the surge in popularity it's had in the States. We can only live in hope