Bradbury - Musically Balanced, Lyrically Real
By Robin Sisson
2005-03-05
Finding your way can be a lonely and sad pursuit. We've all been there--some may never leave the relative safety of being lost. It's rare to find music which celebrates this universal search, even as it allows a bit of room for healthy wallowing. All 12 tracks on The Front from The Bradbury Press strike just such a balance quite impressively. Neither so sad as to send you reaching for the tissue or razor blades, nor so sweet as to send you running for the insulin or barf bag. Lyrically very real, musically very strong, this release covers all of the real stuff of life without being heavy-handed or brooding; preachy or saccharine. A running theme of hopeful, glass-half-full searching (for oneself, for a connection, for a way to identify and be identified) the band's sophomore effort, The Front, certainly seems to find them headed in just the right direction to find all of these things and more. 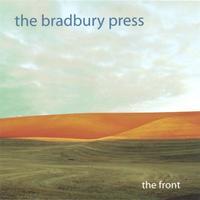 Available Now!Lyrical highlights come in the form of the cool, smooth Lost, a song for which Lead Guitarist Dave Brewer does the honors and asks reflectively, "Who's to blame for making you this way? I don't like them anymore", bringing to mind that one guy who treated you like pearls--even when you felt like swine. Strong, promising writing and musicianship abounds throughout. The ballad Running Through My Mind, a seemingly very personal eulogy to a love lost forever, sports an interestingly Norwegian Wood-esque intro sans sitar, and makes you feel like you might be getting just a glimpse into its writer's very soul. The tongue-in-cheek Country Ditty forces a smile of remembered lovers' spats in the same way Barenaked Ladies' One Week did in 1998, with it's own sense of humor. Stilted lines like, "It doesn't matter how I try to say it; my heart, like a fire, burns for you," are held up by top-notch bluegrass-inspired guitar- and banjo-picking (the latter courtesy of guest player Jason Homey). Boasting the chorus "We can change the future with every move we make," the song Domino, presents three scenarios of choice and consequence for one man in a single situation, and shows a bit of personal pathos which forces one to think, even if just for a moment. 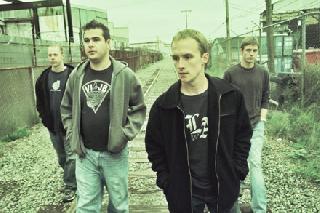 The Front as a whole is a good, solid effort portending the makings for something truly great. This young band -- only a year in its current incarnation -- seems to have found its wings. Infusing what might seem at first glance an obligatory hats-off to such creative forbears as Counting Crows and Dave Matthews Band with notable harmonies and a bit of a country hook, they create an engaging and quirky style quite their own. Lead Singer Darren Golden's deep, rich vocals blend well with artful musicianship in the persons of Lead Guitarist Brewer, Bassist Travis Hartman and Drummer Greg Garcia.

Check out The Front from The Bradbury Press. The band is a great little find and the CD is one you'll only enjoy more with each listen.