Rated: R (American rating for strong sexual content, nudity, language and drug use). Just from the sound of that you already want to see it; am I right?

Velvet Goldmine tells the story of a 1970s rock star who, after a publicity stunt goes too far and ends up infuriating the public rather than earning its love, drops out of public notice altogether, not becoming a recluse so much as completely non-existent. Years later, in 1984, a journalist decides to track down the rock star, Brian Slade, by talking to the people who knew him, and then tracing his road to fame.

Velvet Goldmine is an interesting movie, which is to say, it's not an entirely great movie  it certainly has its share of problems  but it's still well worth watching. This is for a variety of reasons, the least of which is the cast. From Christian Bale (the new Batman) to Ewan McGregor (the new Obi-Wan) to Jonathan Rhys-Meyers (the new Elvis) to Toni Collette and Eddie Izzard (the newuhDonald and Ivana Trump?uhyeahthat's right), each member of the cast is pitch perfect. That's fairly obviously, of course, given their pedigree. 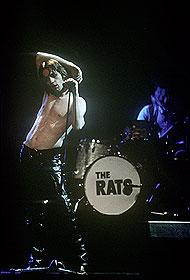 The movie is also interesting because of the intertextual references it makes, referencing everything from Citizen Kane to the works of Oscar Wilde. At the same time, it has an amazing rock score, with such luminary acts as Lou Reed and Placebo contributing to the soundtrack (Placebo even makes an appearance as a glam rock band. Must have been a real stretch on their talents, I know).

No, the most interesting element of Velvet Goldmine is its slashfic nature; the whole thing is a very thinly veiled story between David Bowie and Iggy Pop. Jonathan Rhys-Meyers and Ewan McGregor, through their characters Brian Slade and Kurt Wild, play the closest thing to Bowie and Pop besides the men themselves, and serve as an insight into what rock and roll meant to people not just in the 70s, but up to and including the present day.

With staggeringly beautiful visuals, a daring story, great performances and some fantastic music, Velvet Goldmine has a lot to offer. It's a study of sexuality, of celebrity, of identity and persona. It's a film ripe with meaning. Of course, like I said before, the movie is also a little problematic  it meanders a little too much for my taste, and by the end of it you're left with a slightly disquieting sense of it having offered too much and too little at the same time  but I still heartily recommend it to anyone who has a passion for rock music and what rock can mean beyond the songs themselves.

Next week: Once again, I have no idea. Should be a surprise then, huh?