If you can, cast your mind back to last week, and where I made hint of what I said would be getting reviewed this time around. I promised, if you might recall, "some action", as it were. Ready for some explosive, Behind the Music' type revelation? You could consider it some kind of special anniversary type thing. Anyway, here it is; I lied. I had no idea what I was going to take a look at, but I had that little box to fillso I filled it. I know, I know; that's not really in keeping with the whole journalistic integrity' thing (ha!), but I had a deadline, and it was past due.

Why am I telling you all this? I have no idea. Well, I have some idea. See, I'm a little embarrassed about this week's selection. Of course, there are plenty of other movies in the list of previous columns I should be embarrassed about, but I don't think any of them amount to the embarrassment of this week's film.

I am talking, of course, of Can't Hardly Wait'.

As dorky as it may be, as artistically bankrupt, as etc. etc. etc., I can't help but love this film. Well, film might be too strong a word for itbut it's definitely a movie.

Really, I don't think I should be as apologetic or defensive about liking Can't Hardly Wait' as I'm being. But then I think about having to come out in public and announce myself a supporter of it and I start getting flop sweats.

For those who don't know, the film revolves around the graduation party of a group of high schoolers, tracking all their different stories through the course of the evening and seeing how dramatically their lives have changed after this one night. Of course, putting it like that makes it sound a lot more soap opera-like than it actually is. 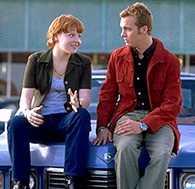 See, with this film you're not going to get any of that artificial drama you get in most teen moviesokay, you get a little. But mostly, all you get is big, dumb fun, with plenty of lines to laugh at in a movie that's simply enjoyable to watch. It's like the better parts of 80s John Hughes films, if you remove all the cringe-worthy elements from them (not that I'm knocking Hughes, so keep your email deluge at bay, alright?).

And beyond the inherent fun of the movie itself, there's also the added bonus of spot-the-teenage-celebrity-to-be, with many now well-known teen film/TV show actors having small bit parts; Eric Balfour, Amber Benson, Jason Segel (from so-brilliant-Fox-had-to-cancel-it TV series Freaks and Geeks') and Clea Duvallthey're all here.

It may not be cool. It may not be savvy. But dammit, it's fun. And with that in mind, I throw my support behind Can't Hardly Wait' and all its adolescent exuberance. And if you're in the mind for something light, entertaining, and a bit of a throwback to teen films of old, I'm sure you will, too.