When it comes to debating religion, theists keep missing the point.
By Lancelot Kirby
2008-01-18
Is there a god

Salman Rushdie in an interview with Bill Moyers made the comment that: "atheists are obsessed with God". I knew just what he meant.

Few people come to such an unpopular concept without spending a lot of time examining theism and its claims. Personally I find religion fascinating because of the passion it ignites, passion for a perceived truth and the mental gymnastics it forces some through to defend their positions.

It is warfare, but of the only kind I approve, the warfare of ideas. As the philosopher David Hume 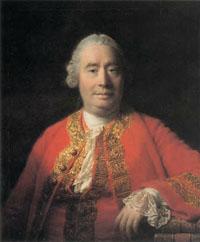 David Hume
is famously quoted, "reason is, and ought only to be the slave of the passions", and even those in the calm of the study (and sometimes not even there) can find it difficult to keep their cool in confrontation. Of course this is true about all strongly held views, not only religion. But religion has always been more divisive than most other ideas.

Although at first a toe-dipper in doubt, I became more firm in my views with the passage of time and continued inquiry. From some of the exchanges I have had since then, and not always about religion, I have questioned, have I become as dogmatic as the dogmatists? Have I, as Nietzsche so phrased it, become a monster by fighting monsters? Well, perhaps this is true if we leave reason at the door, but in this I believe I am better inoculated than most. Sticking to the barricade though the enemy out number you is not the same as burning to death those whose ideas you do not like.

Even many of the most passionate freethinkers, though they might view religion as a very great evil, would never think it right to persecute those who continue to believe. The very term freethinker would mean very little if this were not so. However, that being said, there is a fine line between respect and tolerance. Though I must tolerate many things I do not find acceptable as the price of living in a free and open society, I am not obliged to respect anything.

To return to Hume, as he pointed out our reasoning is always chained to our passions, but without the stick of indignation to rouse us to right action, the carrot would be superfluous. In other words, we are rarely motivated to challenge excepted notions from reason alone; there must be a spark before the powder is set alight. It is common to hear complaints from theists that nonbelievers are cold and rude.

Though I am certain this may be the case some times, it is without doubt more often then not a matter of perception. The path to truth is not always a pleasant walk, and it is not unusual to get scratched by the thicket along the way. For those who honestly seek it, hard and painful questions about preconceived and deeply held values must be examined in the light of day. If the questioner starts to unceremoniously tread upon sacred ground (sacred to the believer) it will certainly be seen as a violent trespass, an assault upon what was believed to be the unquestionable.

So the atheist, by merely explaining why he or she sees the world as they do cannot help but stir strong emotions that very often blind both sides to the higher goal of questioning from the very outset.

Atheists are human too, no matter how much their rivals would like to think differently, and when you encounter a believer who is unable or, unwilling to follow the rules of rational discourse, it is but a short step from heated debate to shouting match.

We walk a fine line, stay silent and keep the peace but allow prejudice and misconception to flourish or, step up and offer ourselves to the pillory at the risk of being accused of rudeness or worse. As a thinking human being who holds the truth in high regard, the latter can be the only option.