We Know Ben Carson is Not President Material

I hear Ben Carson is leading in the GOP polls with Donald trump following right behind him. I can't help but wonder who are these people backing Carson. Seriously, we know he is a nice, quiet and intelligent man while Trump is a loud and outspoken strange man. How did these two ends up the top runners? The reason is the same reason why people are following Carson. People do not trust political already existing candidates. 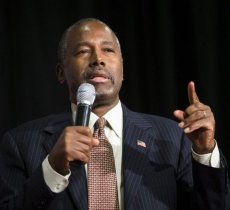 What is the strategy here? For sure there is some kind of game being run here. America did not take it too well when President Barrack Obama was president because he was African American. He being born by a mixed couple mother white and his father was from Kenya. This made him light in appearance and it did not stop the anger of having a black man in the White House. Now you have Ben Carson winning in the polls, an African American with darker complexion. This is not going to hold up. There are too many white people still in racism mode. They could not take another black man in the White House so what is Carson doing leading the polls?

He is just a pawn used to diffuse Trump. The other candidates cannot stand up next to him. They are too political in their presentation. When the first debate came out, Donald Trump set the platform to expose too much of the other candidates agendas that were not in favor of the majority of Americans. He was a genius in using this strategy. Trump single-highhandedly created a smokescreen over them that had them exposing each other's underhanded tendencies causing him to dominate the polls. He couldn't do that to Carson because he was not a political figure. This was in Ben Carson's favor, he didn't get caught up in the web of destruction instead came out smelling like a rose. Trump couldn't touch him nor could the others.

Where does this place us today? It is a mystery who is supporting Carson because whoever it is wants to make sure Trump does not win because they pretty much know they will not be able to control him. Carson's role is not real. It is not about him being the next President of the United States. It is about him being used to destroy Trump. The other candidates are not a threat right now and appear to be fading away. But are they?
Ben Carson is too nice, too soft spoken and appears to be too physically weak to stand up against Congress and the Senate. Who would listen to him plead his case without falling asleep? Come on now be for real. Something is wrong with the picture. Yes, it is getting very scary for the American people.