Saving the Tigers from extinction

Various speakers raised voice against the killing of tigers in the region. Tiger is the national animal of India, which gives shelter to half the world's tiger population. Most recently, a tiger was killed by the villagers in Goreswar of central Assam and some villagers even took away its flesh for eating. The incident , which took place in the last week of December, shook the conscience of the conservationists in particular and common people in general, as tiger meat is not recognized a staple food in Assamese society.

Earlier in a tragic incident, a full-grown tigress was killed by the Assam police personnel in the first week of December nearby Kaziranga National Park locality. It fell victim of nearly 14 shots from two AK-47 rifles operated by Assam Police Battalion personnel after the inmate of Kaziranga came out to an adjacent village named Bochagaon and targeted few villagers. The State Forest Minister Rockybul Hussain had ordered an inquiry into the incident. 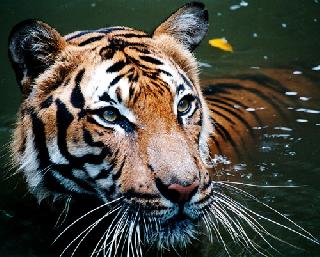 Initiated by activist-journalist Mubina Akhter, the press club meeting was attended and addressed by Soumyadeep Datta of Nature's Beckon, Bibhab Talukder of Aranyak, Purnima Sarma of Early Birds, Satyaranjan Bora of Seuji Dharani Dhunia with many others.

The countrywide census of tiger in January 2008 reveals that India had only 1,411 tigers alive. The number was 3,508 in 1997. In early Nineties, India's population of tigers was recorded as nearly 40,000. Of course, there is some good news that the number of tigers in India is increasing up to 1,875. Assam can take it pride as the State has nearly 15% of India's total tiger population. Five years back, Assam recorded to give shelter to 70 tigers. It has increased the tiger population in 2010 (to over 100).

"Tiger and other wildlife are being regularly poached for use in some Chinese traditional medicine. Many times, the superstition among various sections in the society instigates the killing of wildlife. Hence public awareness is the need of the hour," said Soumyadeep Datta. He also criticized the State forest department for its ineffectiveness to make common people a partner in the conservation effort. Datta particularly pointed out that the publicity wing of the State forest department has done a little in this respect.

"If a tiger is killed by some villagers and even the flesh is taken for eating, the forest department must take prompt actions against them. More over, its publicity wing should rush immediately to the location to understand the reasons behind this kind behavior of the villagers and pursue for conservation of wildlife in those localities," Datta added.

"We have a number of wildlife protection rules but at the same time we need to sensitize the forest officials. The people living in the adjacent areas to wildlife reserves should also be enlightened on the process of conservation," said Bibhab Talukder. He appeals every one to take a pledge in the new year to preserve the wildlife and the environment. Talukder argued that even being pro-people, we could be active conservationists.

Both Purnima Sarma and Satyaranjan Bora emphasized on the community involvement in the mission to preserve nature and conserve wildlife. They also insisted that the government and forest department must play a pro-active role.

Citing the example of Kaziranga tiger killing incident, Mubina Akhter in her speech expressed anger that the authority has not taken any visible actions against the responsible police personnel who was involved in the killing of the tigress near the 430 square kilometer UNESCO World Heritage Site.

She advocated that a group of dedicated reporters should be trained on environment and wildlife issues. Regular interaction among themselves through a network and sufficient space for the issue in the mainstream newspaper and news channels were also emphasized in her speech.