The leader of the Labor Party, Kevin Rudd, admitted to visiting Scores Strip Club in New York four years ago. He was drunk and persuaded to go along with a group of men, but only stayed for about twenty minutes.
By Reece Pocock
2007-08-30

If you want to be the Australian Prime Minister is it okay to visit a strip club and ogle semi nude women?

The leader of the Labor Party, Kevin Rudd, admitted to visiting Scores Strip Club in New York four years ago. He was drunk and persuaded to go along with a group of men, but only stayed for about twenty minutes.

Australian Politics got dirty last week. Someone revealed the above damaging information. It has been alleged it came from the office of Foreign Minister Alexander Downer.

Did I say damaging? The polls showed the Australian people still want Kevin Rudd to be the next Prime Minister. If the election were held now he would romp home with a record majority.

It has been suggested that the Prime Minister, John Howard, should attend a strip show to hopefully gain popularity to at least counter Kevin Rudd's action.

Some street interviews revealed that Kevin Rudd now appears to be more human and not as strait laced as some of his Christian utterings make him appear. Others were totally appalled and said that his action would affect their vote. It's hard to see where these objectors are from the polls.

I prefer to think that the Australian electorate is becoming more mature. Because Kevin Rudd visited a strip club it won't make him a bad prime minister. It will have no affect on how he runs the country. It's interesting the electorate can see that. 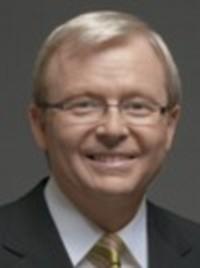 Maybe he has Shane Warne to thank. As a cricketer Shane Warne had no peer and was Australia's best player since Don Bradman. Off the field, Warne harassed young women by continuously sending unwanted text messages. He was caught in many uncompromising sexual situations and for a time he and his wife parted. However, he won many test matches for Australia, so his off field activities had no affect to how great he was as a cricketer.

The Australian people understand that Rudd's activities are mild compared to some ex Australian Prime Minister's such as Bob Hawke and Harold Holt. And don't ever think about comparing him to some American ex Presidents.