President Obama cannot save America but he sure can expose the Murders!
By Linda Wattley
2010-02-23
When I listened to President Obama give his State of the Union Address, tears came to my eyes. Here was a man who genuinely cares about America. This man loves his wife and children. He did not become President for the same reasons most men become President. He became one to show America how sick we really are.

As Obama spoke to the nation, the world was watching but most importantly, children of America were watching as well. What they saw was very sad. Sitting right before us were grown people representing our Country literally pouting like two-year old children. The Republican Party refused to show any signs of concern for the American people. They did not have the ability to give any inkling of hope that we can save America.

These same people ran this Country for eight years. They want us to act like damages that occurred during that time never happened. Anybody in their right mind knows their plans used to run America invoked self-destruction. The damages are still prevalent today. Einstein once wrote: "Doing the same thing over and over expecting a different result is insanity". We cannot continue to follow The Republican Party's way of thinking if we want a solid future for our children.

Because of the past, not the present, America is suffering severely. Democrats against Republicans and vice versa are a guaranteed war that will finish off this Country. Obama, I do believe if he had his way neither party would exist. A House divided against itself cannot stand. While this war is going on, nations surrounding us are getting stronger and watching us become weaker. 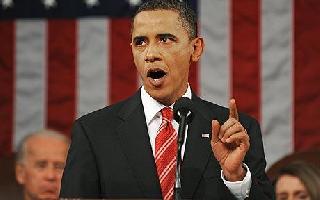 OUR PRESIDENT SPEAKS TO THE NATION
Obama can only expose the catalysts that control and destroy America. Many people responded to his speech like victims who do not know how to accept the truth. They would rather forget the past and blame present choices for the struggles we face today. Because of the severe victimization we have accepted for so long, possible healing is like a dream, a sure impossibility. To survive, many people attack Obama because to accept the reality of what they accepted years ago would be too traumatic. Attacking makes it more bearable when in reality they know we were raped.

For sure, it is obvious the President does not have the power people tend to think he has. Instead they are whipping post for decisions made and not made by people we elect to be with him. Eight years ago it was Bush who was blamed for our woes. He appeared to be in sync with these ridged leaders. But was he really? Obama is not in sync with them and they are determined to tame and break him because no one is coming into that White House and heal this nation. They just will not allow it.

Clean house, eliminate all bacteria. Anything else is continued abused for the American people. Should there be a revolution? Yes!