Bindi's future is already planned for her and she is convinced that is what she wants to do. But the question has to be asked are those around her influencing her because she brings such great publicity to the Steve Irwin juggernaut.
By Reece Pocock
2008-03-09

Bindi looks to me to be a beautiful little girl and every time I see her on television I'm pleased to see her talent and enthusiasm, but somehow the primary reaction is sadness.

Before you say that is because she lost her father Steve in such a tragic and public way, let me say I still felt the same emotions towards Bindi while Steve was alive.

Steve Irwin was a publicity phenomenon. He tapped into the saleability of handling dangerous animals. Television audiences lapped it up especially in the USA where he was extremely popular. His cheeky grin and his cry of, "Crikey" went around the world.

This ability to capture an audience is also a part of Bindi's makeup. She looks into the camera with what I would describe as shy expression that makes her very cute. Although Bindi does appear to be talented, her main attraction is she is ten years old and the daughter of one of the world's most popular men who recently died. 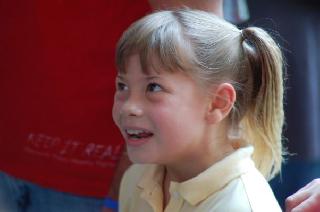 Bindi has her own zoo, TV series, magazine column, and fashion label. She lives at Australia Zoo much of the time, is home schooled, and wears her trademark khaki clothes. She is also an accomplished ambassador for nature where she promotes Australia Zoo and Steve's cry for, "Wildlife Warriors". She appears regularly with her mother, Terri on US talk shows.

Australia now takes an interest in everything about Bindi, her upbringing, how she is dealing with her father's death, and what her future plans are. Most nine-year-old girls future plans are to do well at school and start to plan their futures. Bindi's future is already planned for her and she is convinced that is what she wants to do. But the question has to be asked are those around her influencing her because she brings such great publicity to the Steve Irwin juggernaut.

Maybe she should be playing netball and watching "Pony Club" like other girls her age.

But she was born into this family like Prince William and Harry were into the British Royal Family and they have no choice but to make the best of it.

However, this little girl had to deal with the death of her beloved father in the full glare of an A Class celebrity. You'd think they would have withdrawn her for a few years until she matured enough to make her own considered decision. Maybe she might have chosen to do something else.

But, I suppose like many others, whenever I see Bindi on television I'll continue to feel sad.