Decisions made by both Federal and State Governments in the 1960s, 70s, and 80s are coming back to haunt Australians in the new millennium by costing Australian lives, contributing to greenhouse gas emissions and forcing this country to buy more fuel.
By Reece Pocock
2007-02-10

The decision to withhold funding to the railways and promote road transport over Government run rail transport meant Australians paid dearly. Trains cause less pollution, are far safer, and should be carrying more freight and passengers. The Road Transport lobbyists were far more effective with Governments than their own employees. The result was many of the costs of road transport were absorbed by the public purse allowing trucking companies a great advantage over rail.

In 1996/97, the National Rail Corporation carried 16 billion net tonne kilometres of freight and paid $117 million in track access fees  if the same amount of freight was carried by road it would require 3,100 B-double trucks that would pay only $17 million in registration fees. According to the Australasian Railway Association Inc., track access fees applying to rail operators increase rail's taxes and charges to over 40% of operating costs, two and a half to three times that of road.

Consider the implications. There are about 3,200 trucks per day between Melbourne and Sydney. That's one truck past any given point every 25 seconds. Yet, just ten additional trains each day each way between these two cities would remove all those trucks off the highway saving 330 million litres of fuel and 1 million tonnes of greenhouse gases per year.

Between 1975 and 1988, the Federal Government invested $34.5 billion on roads and $1.8 billion on rail. As a result, Australia's rail industry has to deliver 21st century service on 19th century infrastructure. 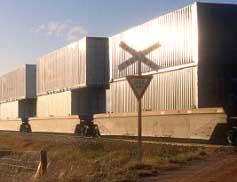 Goods Train with Double Containers
The National Transport Planning Taskforce (NTPT) rated Australia's interstate rail corridors as generally well below world's best practice. Interstate rail corridors east of were identified as having excessive curves and grades and restricted clearances. These significantly impede efficient rail operations by restricting train speeds, restricting trailing loads, preventing adoption of technological improvements such as double stacked containers (one container on top of the other) and causing higher fuel consumption and equipment maintenance than if track improvements were made.

Why do some consumers prefer road transport for general freight? It is cheaper and faster. The cost advantage is caused partly by extra taxes and costs heaped on rail transport and partly by cost conscious road transport operators who are able to force contract drivers to work prohibitive hours. The speed of delivery is hampered in rail transport by slow loading techniques and slow trains. With improved track conditions, modern fast trains could compete with road transport.

How do governments in the 21st century correct the mistakes of earlier governments? They can't raise costs to road transport operators after decades of minimising their costs. We can imagine thousands of semi-trailers descending on if the government tried to do that. Not to mention the thousands of truck drivers who would be made bankrupt and out of work. Chaos would be caused to the truck sales industry with thousands of unsaleable trucks sending many businesses to the wall.


The profile of rail transport must be raised in this country and upgraded to be a significant partner with road, sea, and air transport. needs all systems of transport to compete on an equal playing field. This means lowering the cost and correcting the low investment in infrastructure for rail transport in the future.

The move to privatise the railways must be accelerated. The contest between the railways and road transport is a classic example of the difference between public and private enterprise with very predictable results. In short, the railways need entrepreneurs to revive and revitalise the industry. Where are the Sir Peter Abeles or the Sir Reginald Ansetts of the railways? They surely are needed.

must be able to enjoy the benefits of a robust and efficient rail system. Our future depends on it.

'The obvious question the report raises is, if rail is economically so sound, why is the modal share so low on some corridors? This raises a number of issues about the distorting effects of current government policy on competition, economic regulation, assess pricing, and industry structure.'

Perhaps the penny has dropped with the opening of the new to rail link. More privately owned railways are finally promoting themselves. But there is a long way to go.

If only those Governments in the past had to for sight to see how their bad decisions would take decades or maybe centuries to fix.