When a body is delivered to the morgue, the Coroner, or in many instances now known as the Medical Examiner, have to answer two questions. Firstly, how did the person die, and secondly, when did he or she die?
By Reece Pocock
2009-02-13

This article belongs to D.E.A.T.H theme.

We have all been given to understand the life of a glamorous Crime Scene Investigator is all excitement and checking to make sure their lipstick and eyeliner is on straight. Or, that Gil Grissom (the lead character in CSI) is going to walk in with some revelation that is going to solve the case.

The reality is forensic laboratories are mostly about death.

When a body is delivered to the morgue, the Coroner, or in many instances now known as the Medical Examiner, have to answer two questions. Firstly, how did the person die, and secondly, when did he or she die?

To understand what makes up a laboratory we need to know the cornerstone of forensics. Dr Edmond Locard a French police officer first noticed that it is almost impossible for any action to take place without a transfer of materials. For instance, if you pat your cat, somewhere on you or your clothes you will find cat hairs. The cat will have your sweat on its fur. This is known as Locard's Exchange Principal. 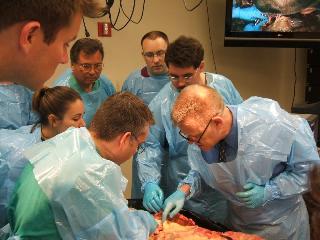 The professions that are necessary in a crime laboratory explain what the real forensic scientists do.

Crime-scene Investigator: These are the people who visit the scene to find, collect, protect, and most importantly transport evidence to the laboratory.
Latent print examiner: As the name suggests, they examine finger, palm, and footprints, lift them and compare the prints to any known criminals on a database.

Toolmark examiner: Tools leave behind distinct marks that can be compared to suspect's tools.

Document examiner: Determines authenticity and authorship and looks for alterations.

Then there are the most highly trained members of the team that analyses bodies to determine how a person has died and when.

Pathologist: A forensic pathologist is a licenced physician who deals with the nature of disease and trauma. This person is right at the top of the experts and is responsible for applying the science of pathology and how it applies to the law. He or she uses autopsies and police reports with suspect and witness reports, medical records and much more in the pursuit of the answers of how a person died and when.

Anthropologist: Studies human skeletal remains to determine the age, sex, and race of the deceased. A forensic anthropologist can also identify injuries, illnesses, and the time of death by studying bones.

Entomologist: Is very important when determining the time of death by using knowledge of the life cycles of flies and other insects that feed on the corpse.

Psychiatrist: May be asked about someone's suitability to stand trial by assessing their sanity. Sometimes acts as a profiler by studying the actions of a perpetrator that gives the investigators an idea of the criminal and where he or she may strike next.

Serologist: This unit deals with blood and other fluids such as saliva and semen. A serologist conducts blood typing and these experts have the very important job of DNA profiling in the crime laboratory.

Toxicologist: studies drugs and poisons and determines whether drugs are present and what type of poison contributed to the victim's death.

Botanist: By examining plant residues a botanist can determine where those traces may be from and could place a suspect at the scene of the crime.

If a doctor has any doubts about how someone died and isn't completely satisfied he or she can't sign the death certificate and must send the body for cause of death to be determined by the experts listed above.

Any deaths like homicide, suicide, accident, as well as any death in unusual circumstances, such as a body found in the bush, the Coroner or Medical Examiner has to determine the cause of death.

These experts are there because we have to know how our relatives died, and so does the state, because criminal activity could be involved.

These elaborate crime laboratories have been established mostly in the last twenty years to keep abreast of smart criminals.

It's good to know they are working for us even if the television version may be more glamorous, the real thing is simple a group of dedicated professionals with hardly a mirror in the place to check if their makeup is smudged.