Down with Minority Groups

Racism, and in fact hatred against most minority groups, is often motivated by the malaise that is besetting the world, and that is the fear of change.
By Reece Pocock
2009-01-23

For observers of our planet, the above sentiment is the only conclusion they could arrive at when they see race hatred, ethnic bias, gender, and religious discrimination endemic to most communities on Earth.

Government, business, and in almost every part of our society, control is vested in the majority. While that seems fair, it leaves many of our minorities vulnerable to prejudice. Firstly, let's look at racism.

Who commits racist acts?
The perpetrators of racial harassment and violence are of all ages, both male and female, and they often act together, as families and groups of friends. The views held by all kinds of perpetrators towards ethnic minorities are shared by the wider communities to which they belong. Perpetrators see this as legitimising their actions. In turn the wider community not only spawns such perpetrators, but actively reinforces their behaviour.
From: Sibbitt (1997)


"
A higher proportion involved white offenders and they were more likely to involve groups of offenders rather than individuals.
Racism, and in fact hatred against most minority groups, is often motivated by the malaise that is besetting the world, and that is the fear of change. We see this particularly in religions steeped in historical beliefs that haven't kept pace with the advance of civilisation and the necessity to keep up. The following extract explains.

Incidents which they perceived to be racially motivated had a noticeably greater impact on ethnic minority victims and their households than other crimes.... A higher proportion involved white offenders; they were more likely to involve groups of offenders rather than individuals; those responsible were more likely to be complete strangers to the victim; and more incidents formed part of a series instead of being isolated occurrences.
FitzGerald & Hale (1996).

Much prejudice ends up in hate crimes against minorities. It may be that the perpetrators see their actions as supporting the majority, and in fact are not crimes, but representing what they perceive as the correct actions against these interlopers who seek to make them change. 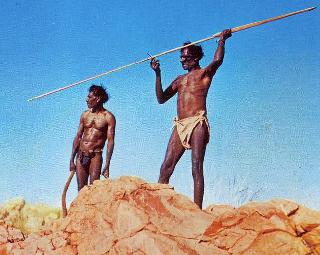 Australian Aboriginals one of the many minorities in the world.
American research has demonstrated hate crimes as compared to general crimes, are more likely to involve excessive violence, multiple offenders, serial attacks, greater psychological trauma to victims, heightened risk of social disorder, and a greater expenditure of resources to resolve the consequences......
Janhevich (2001)
Because most authorities are part of the ruling majority, they sometimes find sentiment with the prejudice and are slow to act to catch the criminals. Police have difficulty dealing with these crimes.

Under-reporting of Hate Crimes: Reasons put forward to explain the high rate of under-reporting by hate crime victims.
 Fear of reprisal by perpetrators
 Fear and mistrust of law enforcement staff
 Belief that victimization will not be taken seriously/or fear of further victimization by police
 Fear of secondary victimization from others eg. Some members of the gay community fear having their sexual orientation revealed
 Failure to classify reported incidents as hate crime because of insufficient evidence of motivation, failure to investigate the context of an incident.
Adapted from Janevich (2001).

The criminal justice system  even when it operates at maximum effectiveness - is limited in its ability to stem the rising tide of bigotry and bloodshed. Solutions that work will require that our leaders lay the groundwork by long-term planning to reduce both intolerance and resentment.
Levin and McDevitt (1993) p. 231

Although the sentiments of Levin and McDevitt were written in 1993 not much has changed. Hatred of minorities still dominates the world, and religious bigotry has increased as modern advances and education threaten the control priests, ministers, and mulars have over their worshippers. However, some are trying to find a way.

Newcastle West End Asian Traders' Association (WATA) (England & Wales) Analysis of racial incidents by the police found that a third of victims in this area were Asian shopkeepers with no formal body to represent their interests. Community police officers visited each one and invited them to a series of meetings. WATA now represents their views, and in partnership with the police and local council who pay for an administrative support worker, works to improve protection, report racial incidents and solve problems.
Source: Jones & Newburn (2001)

Minority groups are essential to how we live. The majority needs them, so they can understand what this world needs for all its peoples. Look at how the scientists who warned us about the dangers of global warming were ridiculed in the early stages. Now, their views are universally accepted. The minority view often becomes the majority view.

Fear, so much a part of prejudice, must be understood and explained to the majority, so they can better cope and live their lives in co-operation and peace.