This article belongs to Addictions theme.

Addict: One who asks themselves whether they are addicted to something.

Rationalization: A small cartoon character who appears on your left shoulder and tells what you are doing, or are about to do is perfectly okay.

I hear about this all the time, lately. I even know someone who falls into this category. Mike. Smart guy. Thirty five years old. Fairly good looking. Good sense of humor. Does he have a girlfriend? Nope. Does he have a good job? Nope. You know what he DOES have? A 60th level warlock in the online video game, "The World of Warcraft".


"
He told me that he's had sexual fantasies about some blue, female wizard or whatever who fights in his party.
Seriously. When he gets home from work, he plays this game until "Too late sometimes", as he puts it. On week-ends, he plays from the moment he gets up, until he goes to sleep. He tells me that sometimes, he finds it hard to leave the game long enough to go use the bathroom.

He has also told me that he's had sexual fantasies about some blue, female wizard or whatever who fights in his party. He's sure she looks like that in real life. Except that she's probably not blue in real life. Right. I think she's really a hairy fat guy named Floyd. When I shared this with him, he gave me a look that made it clear, I just insulted his future wife. Maybe someday, he and Floyd will meet, fall in love, marry, and spend the rest of their days playing Warcraft together. Who knows? 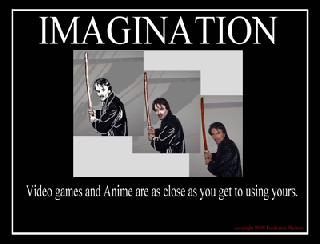 What the hell? I mean look, I can understand people getting caught up in booze and gambling and such. But where's the upside to Warcraft? No buzz. No orgasm. No chance to win money. What's the appeal? Forget it. I don't even WANT to know. In any case, I consider Mike an addict. He considers himself a skilled warrior. I guess time will tell.