Religion is the Crack Cocaine of the Masses

With the election finally over, we can turn to the biggest social divider of our lifetime, religion.
By DNA DNA!
2008-11-06
Is there a god

With the election finally over, we can turn to the biggest social divider of our lifetime, religion. Like a fairy tale that has all of humanity enchanted, nobody seems to be able to break the 2000-year-old spell. Karl Marx's most quotable line had a simple meaning - religion helps people get through the day (and night). But is religion more than a placebo for what ails us, or is there substantial evidence that anchors it to our lives?

As children we are led to believe that Santa Claus and the Tooth Fairy are real, only to have our dreams demolished before the age of 5 -- but Jesus and Moses continue to lull us to sleep every night. Was walking on water a real event or just an aquatic fish tale? Was the burning bush that talked, brought on by a disturbance in the temporal lobe caused by the physical exertion of climbing a mountain? Did anyone's ascension to the clouds happen without the effects of a magic mushroom elixir?

Faith is a fickle mistress. Sometimes in order to get people to have faith we must pound it into their heads with repetitive droning - noted by G. Gordon Liddy, as an effective manner of brainwashing. Often I have had various members of the Christian faith show up, knocking on my door, wanting to let me know that if I don't believe, I will go to hell. Never have I had a Jew show up at my doorstep although they are the ones who could really use the numbers! 93-7% of America is made up of Christians of various denominations. Jew's make up a much smaller number, 1-2%. That means there are more Wiccans in our country than Jews. There are more people who worship trees than a burning bush in America. There are more people who believe that there is a half-man, half-goat who plays the pan pipe and roams the woods, than there are people who believe a bearded man with a walking stick parted the Red Sea. Side-by-side most religious stories look equally preposterous. Joseph Campbell, in his last speech, was firm in his tone that unless we find some common ground to walk into the future onwe are doomed. 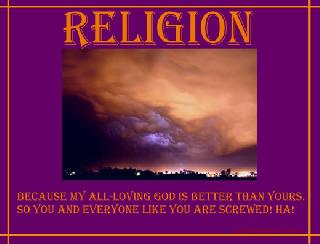 A strong building needs a solid cornerstone and the foundation of Jews, Muslims and Christians rests on the shoulders of an Old Testament dude named Abraham. He lived between 2500-5000 years ago depending on how you gauge it. That's a decent amount of time to go from an oratorical story to text to get funnelled through a myriad of translations, only to arrive to modern day, unchanged. Have you ever played the game Telephone? Sentences have a way of getting garbled as they pass from ear to ear, let alone 5000 years! It is fanatical to say the words of "sacred" texts have not been modified to fit our screens.

Dawkins and the rest of the atheist nation aside, the decline in church memberships, and an abandonment of orthodox tenets are seeing this day's generation in tough times. I dispute the teachings of the prophets not to gleefully be a nihilist, punk rocker or sarcastic Jew; I seek a deeper truth. I want a glimmer of the transcendent and I would love a peek at a bonafide miraclebut I guarantee you that even if a blue skinned deity shows up at my doorstep promising salvation and a bag of chips, I will not be signing up for a membership. I've studied cults for too long to be a good candidate.