The Message of All Religions (and why it's usually ignored)

The Message.
Why couldn't they ever listen to The Message? It was always SO simple:


"
The first thing man did was to create more than one god. There was your god and my god.
1. There is only One God. You can call Him God or Allah or The Force or the Mystic Flying Turtle (which, for about 600 years, a group of South American villagers did). He really doesn't care.

2. Don't WORRY about what other people call Him, how they connect with Him or whatever. Just do your best to find your own path to Him.

3. The One and Almighty would like you to try to occasionally connect with Him. Humans were pretty good at this early on but over the last three thousand years or so, it was like owning a dog that was deaf, blind and couldn't feel you petting it. Just not terribly gratifying. So the whole Connecting with Him thing, wasn't going so well.

4. Be nice to everyone  including yourself and those you would call enemies. After all, He created them all and it really isn't good for you to go around picking on His kids.

So what did the humans usually do when they got The Message?

1. The first thing they did was to create more than one god. There was your god and my god. As if humans really understood the true nature of The One God. Oddly, at one point, a large number of them decided to promote one of the angels to the status of a god. Everyone knew that no angel of ethereal being could interact with humans, unless given the power to do so by God. Yet, Lucifer was now considered nearly equal with The One. He supposedly had supernatural powers and dominion over the physical realm, that rivalled God's! All the angels thought this was hilarious.


"
Dear Lord, help my mom and dad and help Joe with that nasty haemorrhoid. Oh, and by the way, if You get around to it, could You make that lotto ticket I bought win? Thanks a bunch!

2. Once humans decided they believed in Him, they argued endlessly, over whether the One God preferred to be called Jehovah, Allah, Buddha, Shiva or just plain God. Worse, they seemed determined to kill everyone who understood Him through a different messenger. This was like having a pack of rabid, cannibalistic pit bulls as pets. Obviously, you loved all your pets but it would sure be nice if they'd quit eating each other.

3. Those who did take time to connect Him usually just asked Him for stuff. Very annoying. Many of them thought they were smooth because they would ask for things on behalf of others, before getting around to themselves. As if He wouldn't see through this. I mean, if you can't see through that one, you don't get the job of Divine Deity. "Dear Lord, help my mom and dad and help Joe with that nasty haemorrhoid. Oh, and by the way, if You get around to it, could You make that lotto ticket I bought win? Thanks a bunch!". Please. Like He didn't see through that... 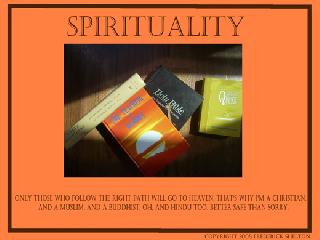 But the worst of these, were the ones who would go before Him and ask Him to kill some of His other children, because they had judged their fellow humans to be poor quality work on God's part. Like humans were in a position to judge the quality of God's work! They weren't. That was one of the most basic messages and it was invariably lost on them. Don't judge others. Shame they could never seem to grasp this concept. 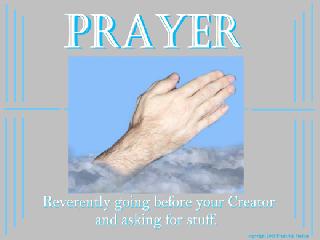 He'd hoped the primary use of their brains would be to create beauty, philosophy and art. Some of them actually did, and with that, He was pleased. Unfortunately, only about one percent of them, went that route. The rest had a passion for violence! They made the dinosaurs look like kittens. Humans infused violence into everything they did. Their art, their books, their movies and don't get them started on video games. Oh well, they would probably eradicate their own existence altogether, within a few more millennia.

In the meantime, he would send them one more prophet. One that was different. No religious background. Bit of a scoundrel, actually. How would they respond, this time?

To be continued in Frederick Shelton's upcoming book "The Blessing". If you would like an autographed copy upon release, write Frederick at fs@frederickshelton.net