7 reasons why the GOP has already lost This Election

Why will the GOP Lose This Presidential (and several senatorial) Election in 2008? Seven reasons. All pretty simple. Here they are:

1. George "W" Bush. THERE'S a reason not to vote Republican again! On 9/11, terrorists attacked the USA. Ever since, Bush and Cheney have been systematically destroying everything it stands for. What they have done to the Constitution, is what most people only do to toilet paper.

3. Appeal. It didn't take long to see the difference in initial appeal of the campaigns. Obama had just beaten the Powerful Clinton Machine. He was Black(ish). 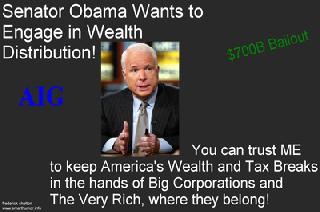 His message was of hope and change. He was so damn charismatic that, if he so much as burped, 11 news and cable stations covered it. Obama attracted larger crowds in foreign countries than McCain could rally in his home state of Arizona. McCain was just another old white guy. His message was "Experience". The message Hillary just lost with. Charisma? McCain could set himself on fire and run across the White House lawn naked, and no one would know about it for three days.

4. Sarah Palin. "I can see Russia!", "The Bush Doctrine????", "Thanks but No Thanks", "Read? You think I read???", "Uh, I'm not going to answer that question because I don't have it on my 3x5 cards", Polar Bears, wolves, Unwed pregnant teen-aged daughter, Cronyism, Bridge to Nowhere, Voodoo Witch Doctor, Charging Victims for Rape Kits, $150K on clothes, Tina Fey, Picture Day at the UN, Troopergate So America is faced with the oldest first term presidential candidate picking THIS as his VP. Although she excited the base, someone forgot to mention we've already HAD a moron who lies a lot, hires unqualified friends, and abuses their power. Didn't take long to figure our this was indeed, a pig with lipstick (and VERY expensive clothes) on it. 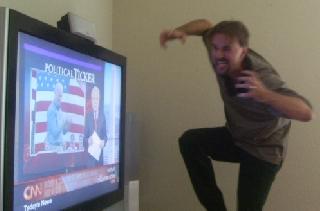 5. The McCain Campaign in General. First, it was "Experience". That didn't work. Then we got us a hottie from Alaska. We're now conservatives! They added "We're Mavericky" too. Polls jumped! For a few weeks. Then they started going down again. So they mirrored Obama's Campaign and said "No, we're the ones for change!". Didn't work. Then it became "We'll fight Pork!". Polls dived. What came next in the campaign?
"
McCain had SEVEN campaign themes in less than three months!
McCain cancelled it! Captain Porkfighter had to go to D.C. to save the country! Problem was, DC didn't want Captain Porkfighter there. So he left. But not before signing the biggest porkbarrel legislation in American History. Oops. Then it became time to just start throwing mud at Obama and hope that something would stick. The campaign thought it would be Ayers. People didn't care. Then came Joe The Plumber! Obama is a "Socialist!". Never mind that McCain just socialized the U.S. banking system That's SEVEN campaign themes in less than three months, folks. How many did Obama have? Final Problem

6. Obama. Almost two years ago, Barack Obama came on the scene with a simple, two word message: Hope. Change. That's it. For every issue, he had a proposal. Iraq? Get us out. Education? Volunteer for tuition assistance. Healthcare? Open up the program available to Congress, to the public. Energy? Oil just ain't gonna cut it anymore. Time for something different. He told us we are a great country. We're capable of much more. Keep your hope. It's time for change. And NOTHING has rattled that message or the candidate who delivers it. Obama has had one theme, in twenty months. McCain has had seven themes in 3 months. Can you say "Erratic"?


"
McCain's brother came back for an encore, with a call to emergency 911 in which he complained about traffic and said "F*@K you!" to the police operator before hanging up.
7. Bad Luck and Stupidity. McCain's brother called Northern Virginia (over 1M voters) "Communist Country". His Spokesperson Nancy Pfotenhauer referred to the same region as not being the "Real Virginia". What did Northern Virginia DO to these people?

Then came the story about Palin's clothes costing $150K  this from the campaign whose platform is "We'll cut wasteful spending!". Frankly, I don't care about the clothes but it's just something to report about, instead of McCain's stump speech on taxes etc McCain's brother came back for an encore, with a call to emergency 911 in which he complained about traffic and said "F*@K you!" to the police operator before hanging up. Nice.

As of couple of days ago, a story that's been floating around the internet and Rolling Stone Magazine, is beginning to get huge coverage from all the tv stations (except FOX). Remember ACORN? Five thousand voter registrations falsely filled out. Of course, without ID, they don't make much of a difference. Well, The Republicans now have their own "acorn". Colorado Republican Secretary of State, Mike Coffman has been accused of purging over 30,000 voters. What do they ALL have in common? They're Democrats. Oops. Of course, he claims "I've done nothing wrong and the number is probably closer to only 16,000." OOPS! He admits purging at least 16,000 Democrats from the ballots. Just what McCain needed.

So there it is. The Perfect Storm for the GOP. The worst incumbent in history. Both candidates on the ticket are seriously flawed. A bad campaign. An amazing opponent. And a bit of bad luck. The only thing that could save them now, would be another 2  3 dozen Mike Coffmans out there, purging all the Dems they can, out of existence. Even that may not be enough.