Falling Up The Stairs

When You Fail, Move Forward, not back
By Dr. Freddy Davis
2004-05-16
There have been a lot of really good movies made over the last several years. There are a lot of bad ones, too. And while I try to simply ignore the bad efforts, I like to take lessons from those which have profound messages to share.

Among the more noticeable movies I have seen lately are the Matrix movies. And, while I don't like everything about the series, I have been totally fascinated by the philosophical questions it has posed.

At the beginning of the first  movie, there is a scene where one of the female stars is running away from a computer generated Bad Guy. She desperately runs through a building, up the stairs, out onto the roof, and then begins jumping from building to building. All the while, Bad Guy is right on her heels. Then, with nowhere left to go, she spots a very small window in the building across the street. She suddenly makes a mad dash to the edge of the roof, and hurls herself through the air like Superman. Her body flies through the air, into the small window, which is barely large enough for her.

As it turns out, this window is in a stairwell. When she gets through the window and hits the ground, she rolls down the stairs and ends up at the bottom, all sprawled out. At that point, she pulls out her gun and readies to shoot, in case her pursuer comes from behind. He doesn't, so she jumps up and runs to safety. We have all seen movies, some comical and some serious, where a person falls down the stairs. It makes for great drama.

I remember another movie with a similar scene, but this one was a martial arts comedy. In it, Good Guy and Bad Guy were fighting at the top of a set of stairs, which ran up the side of a mountain. After a furious fight, Good Guy knocked the Bad Guy down the stairs. Because it was on the side of a mountain, Bad Guy rolled, and rolled, and rolled, seemed to go on for forever. Normally, this would cause high drama, but it was a comedy, and made to look very funny. After a while, Bad Guy crawled all the way back to the top of the stairs. Unfortunately for him, Good Guy was standing there, waiting for him. At this point, Bad Guy knew it was hopeless. Without even fighting, he simply laid down, and rolled down the steps again - on his own! It was hilarious.

Whether it is for high drama or to provoke laughter, falling down the stairs makes for a good scene in a movie. But what does it signify? It typically denotes failure, hurt or humiliation. Do you remember ever seeing a movie scene where someone fell "up" the stairs. Not likely! That doesn't quite carry the same kind of impact.

Taking this imagery and applying it to life, we can look out in society and see people all around who have, figuratively, fallen down the stairs of life. There are those who are very tragic figures, such as the homeless, drug addicts, and whinos. Some of these people were once "on the top of their game," but something happened, and they fell. There are others who are not completely hopeless. However, they constantly sabotage themselves whenever they get to a place in life where they might progress to a higher level. Then there are those who never really take life seriously. They aren't out on the street, but they have no ambition to move forward - the couch potato crowd.

But, honestly, most of us are trying to go the other direction. Instead of starting at the top of the stairs and rolling down, we start on the lower steps and have been striving our whole lives to move higher and higher. We are trying to run up the stairs, not down. And if we fall, the tendency should be to fall forward up the stairs, rather than backwards. We may have periods in our lives when we get tripped up, but if we are moving up the stairs, it is easy to pick ourselves up and keep going. If we quit trying, that is when we begin the fall that takes us downward.

Life is a Stairwell 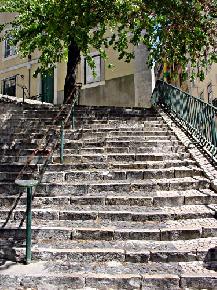 In many ways, the whole process of personal growth is like living life in a stairwell. We are constantly trying to make our way to the top. Yet there are obstacles. The steps, themselves, sometimes prove to be a problem. Each time we take a step up, we are closer to our destination. Sometimes, though, we become too tired to go on. Sometimes we don't pick our feet up high enough, and we trip. And occasionally, we may even lose our balance, and go tumbling down toward the bottom.

While the parallels of living life and walking up stairs may seem obvious when we think about it, I believe that it is safe to say that most people don't fully understand the nature of the whole process. The fact is, it plays out in a lot of ways in our lives.

We see it in the emotional arena. It is a goal of most of us to stay motivated and be happy. But how many times have you struggled with discouragement and depression which caused you to fall?

We see this in the physical arena, as we try to stay in good condition. Everybody knows, through personal experience, that being trim, having a good strong heart and lungs, and developing strong muscles makes you feel and work better. But how many times have you let yourself become fatigued and out of shape?

We also see the principle operating in the mental arena, as we take classes and certification courses to become smarter and more qualified. Yet we have all experienced those times when our brains just would not wrap around the material we needed to master, and we felt defeated.

Finally, we see it in the spiritual arena, as we work to improve all of the important relationships in our lives. And even though we work hard in this arena, we still find ourselves struggling with poor self-esteem or poor communication skills.

Putting it All Together