Experts to arrive at Cherrapunjee to study the fading rainfall

The monsoon magic at mesmeric Cherrapunjee, famed as the wettest place on earth, appears to be fading by the day, with the locals seemingly coming to terms with a new sobriquet for their land - worlds first wet desert.
By Saidul Khan
2008-07-22

Meteorological records show this year during the monsoons, the hill town, now called Sohra, has received about 700 mm less rainfall till June 30 last. While the normal rainfall in the first 30 days of the monsoon is 2793.9 mm, Cherrapunjee received just 2092.6 mm.

Experts hoped the deficit is expected to be supplemented in the next couple of months of the season. 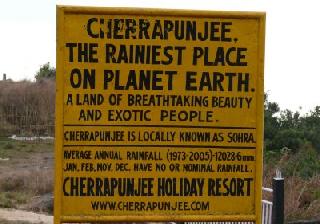 Placard displaying that cherrapunjee is the worlds\' wettest place

Earlier, the state government had inked an agreement with the Centre for International Agricultural Development Cooperation (CIADC) of the Israeli Agriculture Ministry for technical collaboration in rainwater harvesting in Cherrapunjee. 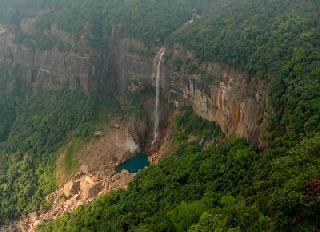 The CIADC of the Israeli Agriculture Ministry would provide sustained education on rainwater harvesting and creation of structures for it, besides funding pilot projects for regenerating forest cover in barren land.

Cherrapujee receives about 20000 tourists annually and tourism here depends more on the fame of it being the world's rainiest place as Agra depends on the Taj Mahal for visitors.