Addictions Anonymous, 2: Self-help, Professionals And The Role of Religion

If mental health professionals find problems with my ideas, senior members of the various Twelve Step groups may well join them in the complaint department because I suggest, in the pages to follow, some re-wording of those basic Twelve Steps.
By Julian I. Taber, Ph.D.
2016-02-03
Is there a god

If mental health professionals find problems with my ideas, senior members of the various Twelve Step groups may well join them in the complaint department because I suggest, in the pages to follow, some re-wording of those basic Twelve Steps.

Times and people have changed in the seventy years or so since William Wilson wrote his program for recovery in Alcoholics Anonymous. Our courts have increasingly classified Alcoholics Anonymous, and, by extension, all similar Twelve Step programs, as religious organizations. The words God and Higher Power appear in the steps for recovery, and meetings often begin and/or end with group prayer. The problem with this arises when professional treatment programs order their patients to attend such groups as a part of treatment. It amounts, in the eyes of the law, to enforced religious attendance, and the courts have ruled in favor of those who filed complaints. 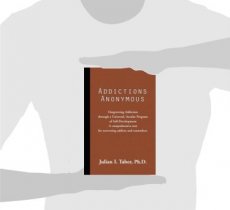 We may not like what the federal courts decide, but it is the law. Learning to obey and respect the law, it seems to me, is fundamental to personality development and to the recovery of normal living. In the United States, we practice the separation of church and state and so, by extension, we cannot use government money to force religious participation. Fortunately, I think there is a good way out of this problem.

Religion is, of course, a matter of personal choice. And I do not agree with treatment programs that enforce attendance in any particular self-help group program as a part of their treatment, whether or not is contains religious elements. Very often, paid professional addictions counselors attend community groups along with patients and run the meetings. This, of course, is in violation of the traditions of Alcoholics Anonymous as we shall see later. Good treatment would involve suggested exposure to, and study of, any and all self-help programs offered in the community. Recovering addicts cannot learn to make good choices if choice is taken from their hands by the treatment staff.

As far a traditional A.A. meetings go, if someone is abstaining and is comfortable in their recovery, there is probably little point in changing what works for them. As senior members of self-help groups know, however, some newcomers take a long time to accept parts of the recovery program. Most newcomers, in fact, leave after a few meetings; the retention rate in Twelve Step groups is low, and this is sad because there really is not much long-term help available outside of these Twelve Step groups. Although the dropout rate is high, many new members eventually return. Growth and understanding take time to develop. Professional treatment programs last only for a matter of days or weeks, and then the person is alone once more. Professional treatment is very expensive. The self-help groups will always be there, however, and they are free.

It has been my impression that even if a person leaves a Twelve Step group after a short time, he or she has learned something of importance, perhaps just a thought or bit of information that may surface months or years later to lead them on to a better abstinence and back to the group. We have no way of knowing the long-term benefits of attending even a few meetings, but something, I think, is always learned and retained.

There is a tendency among mental health professionals to ignore the Twelve Step recovery programs. They may leave clients in the hands of recovering peer counselors who themselves are abstaining addicts paid for their work. Professional treatment sometimes does not even recommend or encourage attendance at meetings of any of the various groups that have the word anonymous in their names. Some mental health professionals, in fact, warn clients to avoid self-help groups that offer any kind of spiritual education. Ethically, the professional therapist cannot force attendance in self-help groups although in the past our legal system sometimes has done so as a condition of parole or probation, but we should at least encourage clients to try them.

Professional psychotherapy is restricted by financial resources, but many addicts see psychotherapy as more noble or perhaps more effective than long-term participation in any of the groups of anonymous fellow sufferers. In my opinion, it is a disservice to honor the client's belief that he or she is too good or too complicated for self-help groups. It is a disservice to offer the hope that some relatively quick therapeutic magic can eliminate a serious addiction. Obviously, once treatment is finished, once the bills are paid, the client is again alone to cope as best he or she can. Experience shows that without the continuing compassionate care of groups such as Alcoholics Anonymous or Overeaters Anonymous, the chances of good abstinence and improved quality of life are significantly reduced.

In many cases, when professionals sell treatment for the various addictive disorders, they have little to offer beyond a few psychological tests, perhaps a captive meeting of Alcoholics Anonymous, and whatever number of group therapy sessions health insurance plans are willing to subsidize. A rare treatment program here and there bothers to collect and publish its success rate where success is defined in terms of abstinence and improved quality of life. Psychotherapy is still very much an act of faith when it is offered by itself as a treatment for addiction.

The Anonymous groups are free, and they will be there long after therapy is over. They offer in their philosophy certain profound and necessary conditions for normal living. Related groups for loved ones of the addict offer help and support to others in the addict's life through the practice of the same value system.

One advantage of a well-trained doctoral level professional should be a broad view of the individual client, and of all the other possible problems that may be discovered. On the other hand, members of Twelve Step groups have a great depth of understanding in the particular problem with which they deal. It would be my preference to see professional treatment as an auxiliary to Twelve Step or other kinds of community groups, not the other way around. In my estimation, only about twenty percent of addicts have problems that require professional attention, the rest in some way are able to cure themselves or use the folk psychology of recovery groups such as Alcoholics Anonymous.

Many psychological problems for which professional treatment might be helpful seem to emerge later in abstinence; frequently an attempt at psychotherapy is ineffective in the early days of sobriety. The first step is to acquire some degree of emotional stability through sobriety or abstinence, a stability that includes a resolution to do whatever is required to keep and improve the quality of abstinence. More than abstinence, sobriety is a state of mind that can be learned, practiced and taught to others. This is a state of mind that all addicts must learn. I use sobriety and sober to refer to a mature state of mind as much as to non-intoxication.

The first priority is always to stop using and, sadly, many therapists still try to work with clients who are practicing an addiction when they should suggest the client attend a recovery self-help group and have a medical detoxification program if needed.

It is my strong opinion, then, based on experience with addictive disorder clients, that professional treatment should support and compliment a Twelve Step Program or other long term community self-help program. Professional therapy is not, however; a replacement for it. So, I have a problem: how do I encourage attendance in what the courts have decided is a religious organization, attendance that I think is often essential in long term abstinence?

The legal system is not alone in questioning the religious content of Twelve Step programs. Some newcomers in the Twelve Step anonymous groups are put off by prayer and the use of words like God and Higher Power. My goal here is to analyze the ideas contained in the Twelve Steps in terms of their practical importance to recovery from any addiction, not to encourage any kind of religious practice. We must, beyond this, find ways to use Twelve Step philosophy without giving even the appearance of religiosity if we expect the broad support of the professional community and the legal system.

Some will say this is impossible, but please keep an open mind and bear with me.

My ambition is to improve the quality of life on this earth. I take no position on questions of religious belief and leave the reader to formulate what, if any, of such beliefs seem appropriate and helpful for themselves but not for others. Religious elements in any Twelve Step program should, I believe, be considered as personal and private options, never as essential and required elements. This issue, then, is the one on which some readers may take offense. I beg their tolerance for the time being. In rejecting religious aspects of recovery I am not rejecting their value in society or the person who may hold those ideas.

Those who wish to incorporate religious values and beliefs into their recovery programs should certainly be free to do so while respecting the right and ability of non-believers to profit from the basic concepts contained in the Twelve Steps. Tolerance of diverse religious beliefs is essential, and would include, I think, avoiding persuasive attempts to change the religious beliefs of others when such efforts properly belong in the domain of religion itself. In other words, abstinence from addiction and the repair of the damage done by it are the essential areas of focus. Everything else is arbitrary and optional. No matter how important and valuable you have found your religion to be, I suggest you leave it at home and in the church, temple or mosque when you attend a public self-help group.

All that said, some sort of conversion experience to new values, not to mystical religion, is a significant feature in most abstinence and recovery stories. The phenomenon of the spiritual experience will be discussed in columns to follow. The word spiritual is here used in a non-religious sense of the human spirit, and includes motivation, drive, insight or enlightenment. Nothing, however, should deter the individual from privately adding religion to their lives if they wish, but there is no substitute for a new way of acting and thinking here, today, in this material world of ours. Just putting in the concept of God and saying a few prayers cannot substitute for real personal growth and change. On the other hand, no obstacle, not even in the wording of the Steps themselves, should be placed in the path of an agnostic who needs the concepts and values offered in the Twelve Steps yet cannot honestly be comfortable with religion.