My wife and I have a lot of silly ways of amusing ourselves. We go on day trips to nearby locations. We check out caves, parks, and Minor League Baseball games to name a few. Most often, when we are looking for something fun to do our journey takes to some place where there are animals.

We love to go to zoos and nature preserves. We'll even take in a circus or a trip to a farm if we want to be surrounded by critters.

One such diversion we get to enjoy for many months out of the year is our regular trip to The Groundhog Mall.

Stratford Square Mall is located just minutes from our home in suburban Chicago. It is not much different from any other shopping mall. Aside from being less traveled at Christmastime, there is not much to separate it from any other mall with regard to retail amenities.

What does make it special to us is that Stratford Square is what we like to refer to as The Groundhog Mall. In the perimeter of the mall are several parcels of land. I am sure that the owners of the property are eager to sell or rent these chunks of land in order to make a tidy profit off the prime real estate. However, for the most part, there are many sections that are filled with two things; landscaping and GROUNDHOGS! 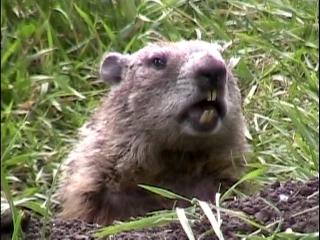 Get Off My LAWN!

At just about any time during the Spring, Summer, and Fall months you can drive around the mall parking lot and see several groundhogs running wild. They are everywhere! Cute, adorable, furry little groundhogs playing, foraging, and burrowing away in their slice of suburbia.

April is a sucker for just about anything that is fuzzy and groundhogs are among her favorite of the fuzzy creatures. When we first met she had never seen one in the wild, only at the local zoo. Having grown up in the country as well as spending many years in the Chicago suburbs, I was all too familiar with ferule groundhogs and promised to show her a few places where I had seen them often.

Naturally, all of my groundhog-spotting haunts provided no furry little monsters and she began to think I was making up the stories of wild animals living in the Chicago suburbs. Eventually I was able to show her some groundhogs. Once the proverbial groundhog seal was broken she was spotting them all over the place. Nothing prepared either of us for The Groundhog Mall.

Before, if we saw one or two groundhogs anywhere within a week we were telling people we'd seen "a lot of groundhogs this week". After The Groundhog Mall came into our lives we were becoming quite accustomed to seeing 10, 15, even 20 little whistlepigs at a time roaming the grounds, surrounded by commercial real estate and soccer moms. Seeing them always brought a smile to our faces.

Before too long April and I would take a few minutes out of our days to head over to the mall and see how many little woodchucks were about. It has become a regular part of our lives. It serves as a great pick-me-up for us if we were a bit down, as well as a great little bit of advertising for the mall. We've told many people about the mall and we ourselves end up shopping there before we go anywhere else. After all, every trip to the mall could provide another memorable groundhog encounter AND a great bargain!

In making these silly treks down the street we end up not only spending some time together but learning more about the animals we were watching as well as seeing other wildlife. We've seen foxes, kestrels, hawks, deer, wolves and many other beautiful animals. Most people never even notice the creatures around them because they are too involved in the abstract business that is inherent to city life. It has made our days together that much more enjoyable.

To folks who are always surrounded by Mother Nature's children this probably seems like nonsense. I understand that. I thought it was strange when April first mentioned to me how much she had wanted to see a groundhog in the wild. I'd always looked at them as big rodents that often pissed off gardeners.

Many folks act all condescending towards us when we share our animal encounters as if to say, "Aww, isn't that cute? They think groundhogs are exotic and interesting."

However, those people often change their tune when we tell them about the times we've seen groundhogs climbing trees or found baby groundhogs running through the fields. Honestly, did you know that groundhogs climbed trees? They're GROUNGHOGS for Christ's sake! "Tree" just isn't in their name!

Last year, knowing that winter was approaching, my brother, Matt, and I took a couple video cameras out to The Groundhog Mall and amassed quite a collection of groundhog footage. I did this so my lovely wife could see some of her favorite little critters even when there would be six inches of snow on the ground. In doing this we learned even more things about these stupid little animals. We heard sounds we'd never heard before, saw behaviors that fascinated us, and stood in amazement thinking about how just a few short feet away was a bastion of commercialism, complete with Starbucks & Sears. All the while, nobody driving or walking by took any notice of the fact that there were many groundhogs right in front of them.

I know it all sounds stupid, but it makes the idea of our taking an interest in these fur balls seem that much more special. It is as if we are privy to some sort of secret that nobody else can know. Somehow, our ability to make buying a toaster or a pair of shoes take less priority than seeing the world around us gives us a feeling of worth not present prior to our discovery of The Groundhog Mall.

Sadly, our days of total groundhog goodness will be coming to an end. We all knew this day would come eventually. Commerce and progress must happen and I have never been one to hinder the growth of an individual, a business, or a community.

Just last week April discovered a sign announcing the arrival of a new restaurant right on one of the parcels of land that is heavily groundhog-laden. We have no idea just how much of the land will be used for eatery and parking, but the construction will undoubtedly disrupt the groundhog population a bit. Sure there is still plenty of untouched land in the area and those that don't get harmed in the process will likely be able to find new homes, but it will not be the same.

Neither one of us will be staging any protests or rallies. We respect the land and the land owner and even though WE like the idea of our own private nature preserve, the fact remains, that property has always been earmarked for a future tenant. In this case it will be a steak house. It could have just as easily been a donut shop or a book store. No matter what, we'll always know the area surrounding Stratford Square Mall as The Groundhog Mall.