One would have though that after two successive coups and one attempted one, the nation of Fiji would have had enough of trumped-up little military dictators but sadly, any notion of a free, democratic Fiji went out of the window when the current incumbent of the title Fiji's dictator came on the scene.
By Henk Luf
2009-08-09

Photo: AP/Rob Griffith
One would have though that after two successive coups and one attempted one, the nation of Fiji would have had enough of trumped-up little military dictators but sadly, any notion of a free, democratic Fiji went out of the window when the current incumbent of the title Fiji's dictator came on the scene.

His name is Frank Bainimarama who has the rank of Commodore, a navy rank, although even the granting of that rank to him remains doubtful this given the fact that Bainimarama was a bad leader, bad administrator as well as having an inferiority complex. In order words, the man who said that he could be, would be, then was, but never should have been, became the person in charge of a navy that consists of 300 people and seven patrol boats in various stages of disrepair.

Not satisfied with just running the Fijian Navy Bainimarama bribed himself into the defence force commander's job and then in 2006, he simply decided to overthrow the elected Fijian Government installing himself as Prime Minister and as has become apparent since, Fiji's nasty little dictator. The nett result has been total military control, interference with religious freedoms, expulsion from Fiji of people he did not like, the sacking of military people he did not like as well as cultivation of a regime of nepotism, corruption and what could easily be described as engaging in inappropriate conduct. 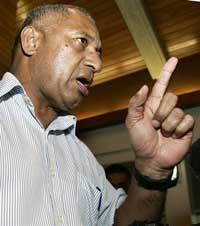 AP Outside Queens Barracks 30 Nov 2006
One example that can be quoted, there are many more, was an incident whereby one person, a John Whippy, was savagely punched to death by Bainimarama's brother-in-law, a Francis Kean, during a fight that happened after the wedding of Bainimarama's daughter which took places only days after Bainimarama took over the country.

Francis Kean, appointed navy commander by Bainimarama just prior, punched and kicked the man to death in a manner that would disgust even an average hardened criminal. Kean was arrested, charged with manslaughter and sentenced to 18 months in prison, the sentenced shortened due to the fact the judge's term in office was just about to end.

Kean served his 18 months, on full pay and entitlements and when he came out, he was reappointed commander of the Fijian Navy.

The newly appointed Fijian President is one of Bainimarama's mates, as are all the other people now operating in key Government positions.

And while all this is going on, the Fijian economy is rapidly progressing backwards with the EU cancelling a sugar assistance scheme and other countries having implemented sanctions against Fiji, mainly aimed at Bainimarama and his hangers-on. The only reasons as to why Fiji's main industry, tourism, has escaped sanctions is the fact that a lot of the tourism activities throughout Fiji are either owned or operated by Australians and New Zealanders.

I am certainly of the view that, after 3 years of military oppression by Bainimarama and his half-wits, the time has come to get a lot tougher on this regime.

Air Pacific could be banned from flying into Australian, New Zealand and the US, an avoid Fiji' travel caution could be posted, the UN could terminate the involvement of the Fijian military in peacekeeping roles and general sanctions as to banning of other than basic necessities could be imposed, such sanctions to remain in place until Bainimarama hands over to an elected and civilian Fijian Government and is charged in relation to his coup and his conduct since.

In all, this particular man has sullied the good reputation of Fiji and Fijians and he should go, not in five years as he keeps on waffling on about, but in five days.

Frank Bainimarama is a grub and he should be, and will be, treated as such.