Is it just in my mind or is it true that basketball has become a ballerina sport?
Watching the Cavaliers play the Hawks was a stone bore for me not because there wasn't no talent or skills on the players part but because there was no self-challenge of the players. I've seen more self-challenging players watching video games than what I saw last night. Who am I to make such a statement? I am a mother who watched her sons play sports for over ten years. And when those boys played any sport, the zeal of the game was found through raw determination to bring forth your best abilities. That was real entertainment.

LeBron James, selected King of the sport right now was decided by his gifts and talents but it was also selected by moneymakers to create a god to control the momentum of the basketball propriety. They make money when their god delivers. This means they have to create a following that will keep people focused on LeBron James. The sacrifice is on the court. And that sacrifice is a real and raw game of individuals who only go so far to release their capabilities. 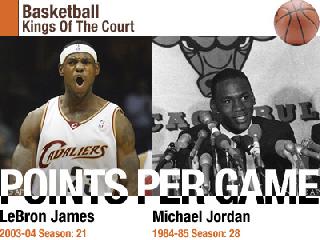 I don't know about you but it appears those who are coming up against the Cleveland Cavaliers are approaching the team as though they are standing on holy ground. They act as though they have been stung with some type of venom enabling them to be self-empowered. Heaven forbid if they bring too much and take away the plan to challenge the King. As awesome as Lebron is, he is being stifled as well because he is not being challenged. His opponents act as though there is an invisible fence around him and if they get too close, they will get stung so they let him do whatever he wants when he wants.

Is this what happens when athletes deny their souls to be the best they can be? They play for money and nothing else? It is obvious, there is no natural spontaneous performanceno real TV. I was so glad when Charles Barkley, one of the sports commentators admitted, it was a boring game. If you are not going to challenge yourself what is the use of putting on a uniform?
When Michael Jordan played basketball, his opponents and teammates all were Kings of the court and challenged one another letting the world know, yes Jordan is awesome and so am I. If he wants to stay that way, we will challenge him to make sure! That was exhilarating entertainment. When there is no heart, there is no magic just a paycheck and that is what viewers get.

What good is it for a man to gain the whole world, yet forfeit his soul?