Cry from Zimbabwe - Please Save us

This article belongs to Terrorism theme.

"We are all terrified at what they are going to destroy next........I
mean they are actually ploughing down brick and mortar houses and one family with twin boys of 10 had no chance of salvaging anything when 100 riot police came in with AK47's and bulldozers and demolished their beautiful house - 5 bedrooms and pine ceilings - because it was 'too close to the airport', so we are feeling extremely insecure right now.

"Help us SEND OUT THE WORD. The more people who know about it, the more chance we have of the United Nations coming to our aid. Please don't ignore or deny what's happening. Our wonderful Christian Bishop Mugabe is a deranged murderous despot given over to greed, power, lust, total madness and total disregard for humanity; he is killing thousands of innocent men women and children. Mugabe is black Hitler! Please speak up now so that this madness can stop."


"
To be frank with you, it's genocide in the making and if you do not believe me, read the Genocide Report by Amnesty International.
This cry is part of an email from Edward Everett Hale inside Zimbabwe. (I hope Mister Hale can remain safe and not be a part of the body count.)
Recent tragedies, similar to what is happening in the holocaust that is Zimbabwe, have proven that the United Nations is impotent when it comes to dealing with despots who seek to murder and suppress their own people.

This tragedy has gone beyond rigged elections and opposition politicians being beaten with Parliament being ignored. The country is overrun with thugs in uniform doing Mugabe's dirty work. More from mister Hale.

"To be frank with you, it's genocide in the making and if you do not believe me, read the Genocide Report by Amnesty International which says we are - IN level 7 - (level 8 is after it's happened and everyone is in denial).


"
A way has to be found to stop the Mugabes of this world.
We need you, please, to get the news OUT that we are all in a fearfully dangerous situation here. Too many people turn their backs and say - oh well, that's what happens in Africa.

This Government has GONE MAD and you need to help us publicize our plight---or how can we be rescued? It's a reality! The petrol queues are a reality, the pall of smoke all around our city is a reality, the thousands of homeless people sleeping outside in 0 Celsius with no food, water, shelter and bedding are a reality." 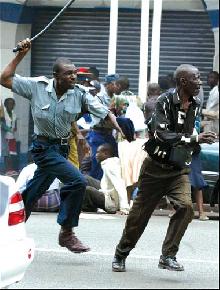 Picture from zimpoliticalanalyst.net
Maybe the answer lies not with the United Nations but with the African Union where Mugabe has his supporters, who seem to be turning a blind eye to his activities. Surely, it is time for the Union to place real pressure instead of paying lip service.

The United Nations sanctions are working, but are hurting the people of Zimbabwe as well as the Government. However, it's not enough; a way has to be found to stop the Mugabes of this world.

Oh, I forgot, it has been. The US with the coalition of the willing went into Iraq and got rid of Saddam Hussein. They were widely condemned, but they did get rid of a dictator, only to plunge the country into a hell of another kind.
The last word from Mister Hale:

"Please send this on to everyone in your address book. We send jokes out without blinking an eyelid. We don't get told this on the news. We only get told what they want us to hear. We all have a chance to do something, even though the something is by informing as many people as possible. Let's stop talking and let's start doing! There is power in more people knowing about this than you in my address book. By forwarding this to all in my address book I have done something. The world needs to know what is going on."