My bungee jump in New Zealand, December 2004
By Andrea Lutz
2005-04-01
December 20, 2004 was the day I finally put into practice a plan I had nurtured for several years: to do a bungee jump. Being in New Zealand, the adrenaline junkie's paradise, I felt that the setting was right. There was only one problem: I was chicken. I needed to make sure there was no way I could back out, so I told several friends of my plan - one of whom, Derek, resolved to come with me to perform a jump himself. There was no backing out.


So off we went. A little van took us to the jumping site (www.taupobungy.com). It was surprisingly close by; I would have preferred a longer ride to put off the jump for a little while longer. But now there was no going back. 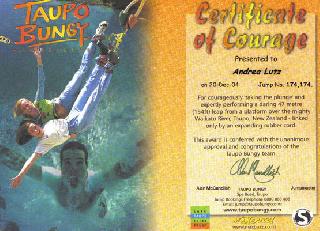 
We walked to the hut where clients were received and I was weighed (it was very embarrassing to have my weight written all over my hand!). Being a typical girl, I don't like to talk about my weight, let alone give it away to everyone who happens to walk past. Studying the number, I resolved to take go on a diet. However, for the moment, there were some more urgent matters to be taken care of.

My friend and I walked to the platform we were supposed to jump from; I was almost paralysed with fear. Derek went first, and appeared quite calm and composed. He also jumped in style, as the video later showed us. I was a different matter altogether - I almost turned tail and ran when when I stepped on the platform and saw the river far below me.

Before the jump, I had to sit down so that my feet could be secured to the rubber cord that would save me from falling straight into the river, 47m below - well, hopefully it would.

The instructor was nice enough and obviously used to dealing with reluctant customers. He assured me it would be easy: "Just imagine you're in your room and about to jump into bed." Yeah, right. He also suggested that I look straight ahead at the trees, and not down at the river - that already sounded more reasonable.

But the instructor still had some hard work to do. He pointed out that it was not productive for me to keep standing there, frightened. He must have studied economics at some point in time. (I did, too, I grudgingly admit.) The instructor said it would be easier for me to jump and get it over with. I knew that he had a point, but it was his next argument that eventually sealed my fate.

To my worried exclamation that I was not ready, he replied, as if this was the most natural thing in the world, "You don't have to be ready  you just have to do it!" Now what could I say to that? The man was right! He told me to look at the camera, which took a picture of my horrified and unhappy face. Then, the unbelievable happened: the pathetic chicken leaned forward...and fell!

It was awful. I had already predicted to my friends that I would scream, and boy, I did. I would have burst otherwise. The feeling of falling and having nothing to hold on to was just too frightening to bear. Funnily enough, I didn't even have the actual sensation of falling. I was just somewhere in the air, not departing and not arriving, and with no idea when I would next feel something solid again. The sensation was a bit like life itself during its worst moments, and certainly not pleasant. 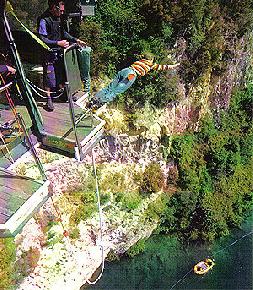 Would you believe it?

Would you believe it?

Finally the rope pulled me up. Friends who had come to watch said that my hand actually touched the water, but I didn't notice. All I felt was relief at being held by that rope. However, this comforting feeling lasted only as long as I was pulled up. All too soon I fell down again and this time it was all the more horrible. I bounced up and down about four times.

Finally, a little yellow boat came towards me along the river, and from inside, a knight in shining armour held out a long pole to me. I grabbed it, but my grip was not tight enough, and I floated away again on my swaying rope. I hung in the air groping around with my arms, until I finally got hold of the pole again, and this time I fiercely held on to it. Eventually, my knight took hold of me himself, lowered me down surprisingly softly, and with huge relief I lay down in the boat. I had survived!

Slowly, normal thoughts returned to my head. I enjoyed the short boat ride on the scenic river, which was the most pleasant part of my whole bungee adventure. We were brought to shore, and had to walk back up to meet our friends. Derek and I both agreed that it had been a terrible experience, but a worthwhile one anyway. I felt great after the jump, I knew I had done it. Best of all, I knew that it was over.

My recommendation to all of you out there is this: try a bungee jump at least once in your life. If a chicken like me can fly by the seat of my pants, everyone can. Remember, you don't have to be ready, you just have to do it!