You may or may not have heard of the Dogme school of filmmaking. Well,
it's not so much a school as it is a series of rules, established by a
group of Danish filmmakers in 1995, to combat the superficialities they
saw overtaking cinema, and to return to something more "true". Anyone
can make a Dogme film, but there are certain rules that need to be
followed. These rules are referred to as being "the vow of chastity":

- Shooting has to be done on location. Props and sets must not be brought in.


- No sound can be made in post-production. Music can't be used unless
it's being produced live in the scene as it is being shot.

- The camera must be hand-held.

- The film must be in colour. Special lighting is not allowed.

- The film must not contain superficial action.

- The film must take place here and now; no temporal or geographical alienation.

- The film must not be a genre piece.

- The final picture must be transferred to Academy 35mm film.

- The director must not be credited.


All those rules must seem restrictive, and they are, but they're not
without their place. When all the extraneous matter of film is cut
away, it's interesting to see just what people can come up with. I
wouldn't want every film I see to be a Dogme movie, but I'm glad
they're out there, doing their best to bring something unique and real
to the screen.

The only problem with making a Dogme film is
that there's so much hype about the theory behind it all that the
movies themselves can get a little lost. The emphasis becomes looking
at how it operates as a Dogme film, rather than simply looking at the
work itself. I think that certainly holds true for the way Open Hearts
was promoted and received, it being one of the more successful movies
to come out of the Dogme school of thought. 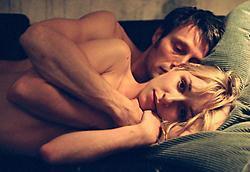 Open Hearts tells the story of a young, happy couple who are torn apart
when the man is hit by a car and is left paralysed. The woman,
traumatised by the event and by her fiancé's sudden shift in character,
takes comfort in the arms of another man - the husband of the woman who
caused the accident.

Sounds soapy, doesn't it? Well, if you
can get past the melodramatic premise, it's actually one of the more
realistic films you'll ever see. There are no clear good guys' and
bad guys' here, and there are certainly no easy answers. The film is
all about that moment when life decides to take a sudden turn for the
worse, and the ramifications you have to deal with when it does.


Closer has been garnering a lot of attention for its frank, ugly, and
realistic portrayal of modern relationships. When I was watching it,
however, I was reminded a great deal of Open Hearts, not so much in
terms of plot  although things do overlap a little  but more in terms
of the emotional truth to be found in both films. Though the characters
do some appalling things, their actions are quite often understandable,
leaving you lamenting the fact that things are never black and white in
the real world.

Open Hearts, just like Closer and its Dogme
brethren, is not a film you watch to escape reality. It can, in certain
places, be an excruciating movie to watch, but it also has its moments
of humour and good will, just like life. That's really what should be
focused on, rather than whether or not it follows any "vow of
chastity". A good story is, quite simply, a good story.

Next week: You know, I have no idea. We'll see what inspiration hits.