Way back when South Park' first started, who'd have thought it would
have the staying power to last for nearly a decade? A good portion of
critics dismissed it as being a crude novelty. Controversy abounded.
The last time there had been such a furor over an animated series had
been Beavis & Butthead', and before that, The Simpsons'. For some
reason, people seem to think that whenever something's animated, it's
automatically meant for kids, and as such, should be an instructive and
wholesome half-hour lesson on how to be a good little cog in the
machine of society.

Umwhere was I? Oh, right; South Park'.
So, yeahclose to ten years after its release, South Park' is still
going strong, and in a lot of ways it's better than ever. Its writing
is sharp and insightful, its humour is laugh-out-loud hysterical, and
it breaches boundaries that other shows simply wouldn't dare to. But
you already know that. What you're here for is to hear about Cannibal!
The Musical'. 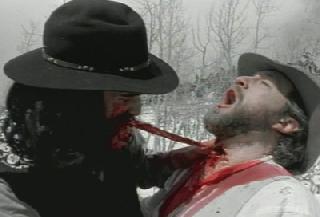 Originally titled Alferd Packer: The Musical', this is the film that
Trey Parker and Matt Stone, creators of South Park', made while they
were still in film school. The main character, Alferd Packer, is an
actual historic figure; he's Colorado's only convicted cannibal, having
been accused of eating the other members of his mining expedition. So
what do the South Park' guys decide to do with such a grizzly story?
Well, they made a musical comedy, of course.

Cannibal' was
made on a shoe-string budget, and it really shows. But, of course,
that's what makes the film so fun and charming. What would a cannibal
movie be without horribly graphic but terribly cheesy gore that makes
you laugh and wince at the same time?

But let's not ignore the
other genre that this little gem of a movie falls into. Generally, I'm
not a big fan of musicals. I tend to find themwellretarded. But the
ludicrous nature of this film works so well with being a musical. In
fact, the songs themselves are so absurd that they work to subvert the
musical genre as a whole  and that's setting aside the fact that
they're damn catchy tunes. Whenever it's bright and sunny outside, I
can't help humming to myself how it's certainly a Shpadoinkle day.

Don't worry. It'll make sense after you see it.


So if you're looking for something cheap and funny, I can't recommend
Cannibal' enough. It's inarguably from the Bad Taste' school of
filmmaking; fill your movie with enough tacky violence and hysterical
one-liners and you've got cinematic gold.

As for what we have next weekwell, that's a surprise. But trust me when I say it won't be anything near as bloody.

Next week: Some open heart surgery (it's not what it sounds like! Promise!)