Rated: R (American rating for language, some drug use and violence).


Quite a few weeks ago, I took a look at Donnie Darko in preparation for
the cinema release of the director's cut. Now the new version of the
movie has been released on DVD, and at the risk of being repetitive, I
figured I'd take a look at it.

For those of you who came in
late, here's a recap of what it's all about (and yes, I've simply
copied and pasted this from the previous articleah, the joys of lazy
hack writing); Donnie Darko is your typical white suburban teenager
living in the 1980s. He's slightly rebellious, he's fairly uninterested
in school and he's always horny. The problem is, he also suffers from
psychotic episodes, and he hasn't been taking his medication lately. So
when a demon-faced bunny with an omnipresent voice leads him to a golf
course in the middle of the night and tells him that the world will end
in 28 days, he doesn't know what to make of it. It's a lucky thing the
bunny, who calls himself Frank, coaxed Donnie from his bedroom, because
that night be a jet engine plummets from the sky and crashes right
through Donnie's ceilingNobody knows where it came from. Whatever
plane it fell from has simply disappeared.

So that's the story in a basic nutshell. The only question is: How much does this version of it differ from the original?


Well, for starters, the director's cut really solidifies the sci-fi
elements of the story. The time travel aspects are brought a great deal
more to the forefront, and their mechanics are given much more
explanation. This really helps to clarify certain aspects of the story,
which is helpful, but at the same time it's a bit of a hindrance.


What was so great about the original version of the film was how widely
it could be interpreted. Some people could see it as an elaborate comic
book 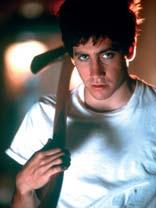 adventure, others could see it as the feverish delusions of a doomed
kid, and some could see it as something else completely different. The
director's cut, while still quite ambiguous in its meaning, really does
nail a lot of things down.

Probably the strongest example of
this would be the montage that occurs at the very end of the movie,
where we see the film's events take place in reverse.

In the
original cut, this was done cleanly and simply, with a haunting
voice-over from Donnie accompanying it. The director's cut doesn't lose
this

voice-over, but it does add a metallic tinge to it that
makes it hard to understand what's being said and somewhat robs the
emotional immediacy of the words. The same thing happens to the
powerful images that run across the screen; the reverse montage now has
a grid placed over it, with images of fireworks exploding interlaced
throughout. The whole thing feels unnecessary, adding a sense of
distance that wasn't there before.

Another negative aspect
would be the music. Both versions of the movie have stunning
soundtracks, but the one piece of music that always grabbed me
(besides, of course, Gary Jules' now famous cover of Mad World, which
plays towards the end of the film) was the use of Under the Milky Way
by The Church. I developed an all new love of the song, thanks to its
use during the party scene in the original film and the eerie parallel
the lyrics had to the story. However, it's been shunted to the front of
the movie in the director's cut, played in the background of a dialogue
scene. Its place during the party has been usurped by The Killing Moon
by Echo & the Bunnymen, which is used to open the film. It, too, is
a great song, but it doesn't capture me the way Under the Milky Way did.


All of these, of course, are simply minor quibbles. As to the question
of whether the original cut is better than the director's cut or vice
versa, my opinion iswell, it doesn't really matter. Neither is better
or worse; they're simply different to one another, and I'm glad to have
both versions sitting up on my shelf.

Next week: A return to shlocky splatter films.