Andy Martello
2005-01-14
comments
Larry Van Pelt of Niceville, Florida is an artist as well as a father,
grandfather, career Air Force officer and fighter pilot. He has led a
wide and varied life with his wife of over 49 years by his side. He is
a good man and a devout Christian. I will not make fun of Mr. Van Pelt
nor his family. I am not a cruel man and, more importantly, Larry
doesn't deserve the scorn from a total stranger, much less a very
FLAWED total stranger. No, I will be poking fun at his artwork.

Few
things are as important to people as their faith in God. How we express
our faith is considered by some as what separates us from the animals.
People take their faith or lack thereof very seriously, and regardless
of my own personal theology I recognize the importance of faith for an
individual. Even a cynical comedian like myself would not attempt to
belittle an individual for his own personal fulfillment provided by his
faith.

However, when it comes to something as subjective as art,
all bets are off. Bring on the mockery! I have to endure critiques of
my writing and my act every day. That is what happens when you try to
create something artistic and then present it to the general populace.
I know it and Larry Van Pelt knows it, so it should follow that I can
critique, laugh at, lampoon, and even ridicule any art form no matter
what the subject matter. I am allowed to have my opinions about music,
literature, sculpture, and even devotional pencil sketches of Jesus. 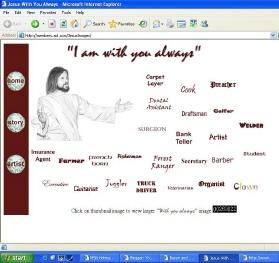 Van Pelt is the artist behind the "With You Always" series
of drawings dedicated to illustrating how Jesus Christ is, wellwith
you always. To any loyal Christian this is a noble calling. To the
casual observer it is a bit too much to take seriously.

These
sketches present a physical manifestation of Jesus watching over and
even assisting various professionals in their daily lives. For example,
Jesus is seemingly guiding the hands of a surgeon during a procedure, aiding a dental assistant during a cleaning - that sort of thing. With all due respect to the creator of these sketches (Not The Creator, mind you.), some of these are a bit creepy and wrong, if you get my meaning.

The list of professions is an odd amalgamation of careers. The drawings include a relentless Jesus alongside a farmer, a carpet layer, an insurance agent, a golfer, and a forest ranger, among others.

Preacher is also in there, prompting a big, " Well, DUH!" from me. Jesus
doesn't seem to care about folks in retail and, while it is no shock
that He is NOT with the lawyers, I find it surprising that Jesus is
quick to invite Himself along on a fisherman's journey, but He has NOTHING to offer a carpenter.

I found this site because Kim from Bacon & Eh's,
a very funny blog I frequent, was kind enough to point out that Jesus
is always with the jugglers! I went to Van Pelt's site and found that
Jesus is quite the patron of the arts.

Among the 25 or so sketches are quite a few of the more creative fields. Included in Jesus' watch list...

Juggler (At least he doesnt like magicians!) Clown (Scary! But this one is in color.) Guitarist (Electric guitarists need not apply!) Artist (Does THIS artist have a Jesus fetish too?) French Horn (The actual horn or a French Horn player? He's not specific.) Organist (Like we didn't see THAT coming! )

I
cannot rail too much on these drawings. They are well-meaning and
honest. The artwork itself is not all that bad. There are a few facial
oddities and Van Pelt can't quite get a handle on his vision of Jesus.

In
all, the details are quite good considering that Van Pelt had never
picked up a pencil for more than writing his name ten years ago. He is
a self-taught artist with a calling to spread the Word and HALLELUJAH to that!

I found it unusual that the sketch of Jesus riding "shotgun" alongside a truck driver featured a driver with a remarkable likeness to B-movie superstar, Bruce Campbell. But NOTHING prepared me for the juggler's sketch. 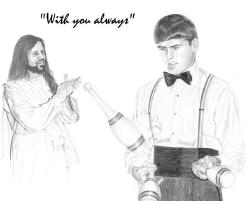 I
found a wild-eyed Jesus applauding during the juggler's performance.
Jesus knows that jugglers need not for material things like money,
fame, or a living wage; just some applause will do. I'd always
suspected this was why I still live in a crappy apartment and
frequently eat Ramen noodles as an entree. That was not the strange
part.

Closer examination to the juggler drawing revealed a most astonishingly odd resemblance to a young Andy Martello.
Sure, there's too much of a Tom Cruise thing happening in the
rendering, but it seems this guy got his inspiration for the juggler
from my old promotional photos. 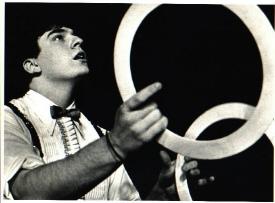 Here's a photo of me taken for a Park Ridge Advocate story sometime around 1988 or 1989. I think I was the ONLY
variety performer under the age of 50 wearing a ruffled tuxedo shirt.
Notice the attire, the hair, the bow tie, and the blank stare on my
face. It is me all over!

What can I conclude from this uncanny resemblance? Jesus is stalking me.

Here's one of me taken a few years EARLIER. I was BARELY 15 years old in this picture and, sadly, I am wearing the same outfit. At least I KNOW the shirt was the same in both photos. Hell, the accessories are likely to be the same. I had NO money for cool clothes! 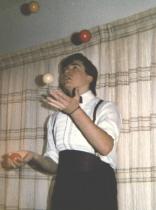 Believe it or not, this was also featured in a newspaper story about me for winning the McHenry County Fair talent contest. These days I can't buy space in a paper. Then...BIG TIME NEWS! regardless, either Jesus or Van Pelt reads a LOT of newspapers.

How could this have happened? Like so many before me, I ask, "Why me, Jesus?"

My
first paying gig was a church craft fair. Perhaps He caught my act
there. I also had an early booking during a church coffee hour, but I
don't recall seeing Jesus in the front row. Of course, this was a
Catholic church so there wasn't ANYONE in the front row.

While pulling these photos and reminiscing about past glories, I recalled a strange gig I had that MAY explain Jesus' unnatural fascination with me - my "original sin," if you will.

Not too long ago I did a show for the Indian Princesses, a group of suburban girls who, for one reason or another, couldn't get into the Girl Scouts.

The
Indian Princesses is some sort of daddy-daughter group and it seemed
fine and dandy. What I found very disturbing was how the dads would
give awards or accommodations to the little princesses by encircling
the girls and chanting, "Dance! DANCE!" It made me think all of these girls had futures in lap-dancing. I digress.

They
were having their annual shindig at a campground in Wisconsin. The
stage I performed on had a backdrop behind it unlike any I'd ever seen
before; a 10 x 10 oil paining of Jesus. Not the whole Jesus, mind you,
just His head. So watching my every move for 45 minutes were underage
Indian lap-dancers, their dads, and the Almighty, sans the Body of
Christ.

The show came to a point where I would juggle flaming
bowling pins. As I lit the pins on fire, I started laughing. I just
couldn't concentrate with the giant Jesus head behind me. I had a
little bit of divine intervention of my own.

I turned towards
the painting and gestured with the flaming pin, waving it dangerously
close to the backdrop. During this motion I joking yelled, "Look out, Jesus!". It was quite funny, juggling the fires of Hell in front of Jesus. The dads got a huge laugh out of it, as did I.

Perhaps
this little bit of comedic genius is what made Jesus find an object for
His affection. With everyone always genuflecting and offering to wash
His feet, I'm sure it was refreshing to find a guy so willing to relax
around the Mighty One. I've always heard that most folks are just
looking for someone with a sense of humor.

I just wish I'd taken a picture of the stage. It would have been a great gag holiday card for my friends in the business: "Andy Martello - Performed for Kings and the King of Kings!"

I
hope I don't start getting obscene phone calls. It's creepy enough that
He's sending along sketches of me. If He wants to start doing
'anonymous' miracles for me, that would be cool.

PSST! Jesus, I could use some more gigs and a GOOD literary agent...

This Story Originated as a Post in Andy's Blog. To Read More Stories Like this or to comment on this Article, visit Tales from Andy Land!