Film Review
By Steven Lochran
2004-05-17
This week's Masterpiece Cinema takes a look at "Donnie Darko" in preparation for its director's cut re-release.


Hello again, me mateys, and welcome to yet another week of yet another
installment of "Masterpiece Cinema." Well, its taken me a while, but
Ive finally come to it. This week:


I've kind of been avoiding writing about "Donnie Darko" because of how
"in" it is. Or maybe it's just that I think its in, because I always
bring it up whenever I'm discussing movies.

Even I'm kind of
sick of hearing me wax on about it. But there are still people out
there who havent even heard of it, let alone seen it, and I just find
that unfathomable (I say, proving how great a pompous ass I am).

But
the reason I decided to finally write a little something about it is
because it was recently announced that a directors cut will be getting
released to cinemas across North America shortly, hopefully with other
countries to follow. So, being a sucker for a nice tie-in, and seeing
as how the storys going to be in some way re-imagined, I figured it
really was the best time to recommend everyone check it out. That way
youll know if you want to put down the money at the cinema when the
time comes. 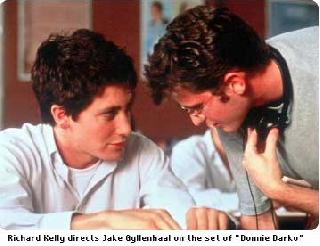 Richd
Kelly & JakeSo heres the premise of the film: Donnie Darko is your
typical white suburban teenager living in the 1980s. Hes slightly
rebellious, hes fairly uninterested in school, and hes always horny.
The problem is that he also suffers from psychotic episodes, and he
hasnt been taking his medication, lately. So when a demonic-faced bunny
with an omnipresent voice leads him to a golf course in the middle of
the night, then tells him the world will end in 28 days, he doesnt know
what to make of it. But its a lucky thing the bunny, who calls himself
Frank, coaxed Donnie from his bedroom. That night, a jet engine
plummets from the sky, and crashes right through Donnies ceiling But
nobody knows where it came from. Whatever plane it fell from has simply
disappeared.

That synopsis barely even scratches the surface
of all the different plot threads in this film. Henry James once
referred to his story "The Turn of the Screw" as being a pudding of a
story (or something as self-congratulatory as that - I really dont get
the fuss about that book). Pudding, meaning a way of describing how
dense and layered the plot was, and thats certainly a good description
for "Donnie Darko." Its a film rife with not only plot, but ideas as
well.


I think one of the more interesting things
I've heard is from this girl who discussed an essay she was writing
about the film for school. She was saying how, in time travel movies
(did I mention "Donnie Darko" also deals with time travel?) the very
nature of time travel defies the existence of God, or at least some
kind of deity, but "Donnie Darko" is different in that everything that
takes place seems to have been preordained to take place. Of course,
the girl was talking about her essay on a request show on the radio as
part of a call-in session, so the extremely annoying host chimed in
with some stupid comments about "Back to the Future" being another time
travel movie before cutting to a song. Oy. 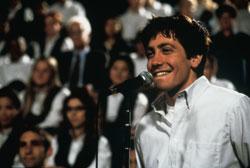 Jake G. in a scene

Jake G. in a scene


Why am I talking about that? Its just an example that I like. Watching
"Donnie Darko" is a great instigator for contemplation and debate the
mark of a truly great movie. But in addition to it being
thought-provoking, its also an extremely slick little film. For the
couple of million it was made for, its visually staggering. And the
actors! My God, the actors! All of them stalwart professionals, all of
them bringing something to the table, all of them incredible. I think
it stands as service to their talent that well-known (and fairly
well-known) names such as Patrick Swayze, Drew Barrymore, Noah Wyle and
Mary McDonnell all show up in the film, but you kind of forget that
these "stars" were even really in it. This isnt because theyre bad, or
lackluster its because they so perfectly embody their characters.

But
let's not overlook the rest of the cast who were largely unknown at the
time of making this. I'm an absolute fan of both Jake and Maggie
Gyllenhaal now due to the strength of their performances in "Donnie
Darko." Everyone in this film is so perfect, its hard to believe.
Theres not a weak link in the chain. Pop culture plays heavily in my
circle of friends, where we can spend entire conversations
communicating in nothing but references and quotes. One of the most
heavily quoted films (besides "Kill Bill" at the moment) is "Donnie
Darko." I think that shows just how greatly it can imprint itself on
ones psyche.

So to leave you, I'll give you a closer look
at the new poster for the directors cut of the film. And just a little
distillation of all my scattered thoughts: if you're after something a
little left-of-center, a little confusing, a little haunting, but very
addictive, go check out "Donnie Darko." Then come back and tell me what
you think. I'd love to hear from you. Next week: A game show host AND a
spy? Golly! 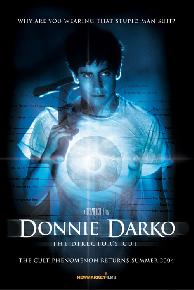