The History of Fantasy

From history and mythology, to literature and the big screen: the resurgence of a genre.
By Daniel Martin
2017-04-23
THE HISTORY OF FANTASY. Not to be confused with science-fiction, which is predominantly drawn from modern technology and a writers projections of the future, fantasy is a culmination of ideas that returns us to, and utilises, the history and mythology of many different cultures.

Science fiction can be seen as a future-fantasy, and this is why generally both genres can be found on adjoining shelves in the bookstore. Indeed, a few authors have managed to obscure the lines between these similar genres. Terry Brooks gives clues throughout his novels that his fantasy world of gnomes, trolls, elves, druids and sword wielding warriors, takes place after a biological disaster, ending in cataclysm and in the rebirth of a world that may have once been the Earth. Other authors, who hint towards their worlds being planets far from the Earth that have evolved similarly, echo this unconventional and unique approach.

This all helps to confuse the boundaries between the two genres. Generally though, it is held that science fiction is futuristic and technological, and is therefore set apart from fantasy, which is a recreation of an old world VIVA LA FANTASY: THE RESURGENCE OF A GENRE For thousands of years the art of storytelling has kept alive the imaginations of millions of people the world over. Much like we would pick up a novel or sit down to a movie today, people gathered to listen to tales of brave heroes triumphing over evil as far back as our early ancestors.

Above all else, the people of those times loved stories. From ancient Greece we have the myths of the gods and goddesses of Olympus, and their influence over worldly characters such as Jason and the Argonauts. And also, the wicked serpent women Medusa, or the winged horse Pegasus. From the Celts we have tales of witches, warlocks, and druids, of savage beasts, and of the elf-like Tuatha De Dunann. Gaelic children fought over whom would be the hero Cu Chulainn, as they brandished wooden swords like great heroes in their youth. And the Dragon, in all its incarnations, from several cultures, has survived in the imagination of kids, big and small, young and old.

John Boormans 1982 film Excalibur left audiences gasping with its imaginative scope and reconstruction of the Arthurian theme. The images are of medieval knights, clad in fantastic armour or masks of gold; but the true Arthur of old is a very different figure. There were probably no gifts of magical powers or weapons. And Arthur himself would have been a violent, fighting man rather than a great king, a warrior tried in battle and a leader of men who shared his strength and skill. But in a brief span of 50 years he made such an impression that his tale will probably never be forgotten. Through the art of storytellers, from medieval to modern times, it has become possibly the most fantastic of all narratives. But it is only one of a plethora of wondrous tales of swashbuckling adventure, strange and savage beasts, of creatures of fairy, magic and war, and of chivalry and romance, which come from the days of old.

In some of our earliest literature, we have preserved many of the finest examples of fantasy: the epic poem from a late tenth century manuscript the Danish story of Beowulf, Homers Odyssey, and Chaucers The Canterbury Tales. Although many of the great historical fantasies have their foundations in reality, some - like the legends of King Arthur and the Holy Grail - have been transformed by the imagination of those partial to tell a good yarn. Fantasy writers today use this creative license to invent whole new worlds of such fantasies. But two things will always remain: The borrowing of these old histories and mythologies from numerous cultures, and that ancient struggle between good and evil.

The resurgence of the fantasy genre can be somewhat attributed to a literary group of friends of which both J.R.R. Tolkien and C.S Lewis were a part of. Known as The Inklings, they regularly gathered to discuss issues including imagination, religion, heroism, and good versus evil. Stemming from these discussions and from the imaginations of these writers came the fantasy masterpieces that helped provide the groundwork for what is now a worldwide, billion- dollar industry. Many decades before The Inklings gatherings, scholars were writing stories of imaginative fantasy.

George Mac Donald, William Morris, and Lord Dunsany all helped place Fantasy on the pedestal it resides upon at the moment. 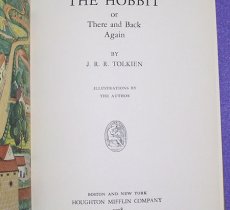 These men have sadly faded into obscurity, but they are worthy of mention, as they inspired Tolkien and others to go to great lengths to refurbish the genre. Tolkien without going into too much detail began by capturing the interest of children with the forerunner of The Lord of the Rings, The Hobbit. Similarly, C.S Lewis with The Lion, the Witch and the Wardrobe, began a series of books which have become classics of childrens literature.

Fantasy for young readers in particular begins really with the fairy tales of writers such as the Brothers Grimm. Of course, all the children who grew up reading these books and tales never, at heart, really grew up at all, for such wonderful stories are forever entrenched in our minds and imaginations. We are influenced by them and in turn so are the following generations. And they are as much fun to read when we are fifty, if only for nostalgic reasons, as they are when we are children. But its obvious these days that fantasy isn't only for the little ones. The Lord of the Rings is no childrens book, nor are the fantasy novels that stock our bookshelves today. By 1977, 23 years after The Lord of the Rings was published, Terry Brooks had published his first novel, The Sword of Shannara. It became the first work of fiction ever to appear on the New York Times Trade Paperback Bestseller List, where it remained for over five months. Earlier works of fantasy preceded The Sword of Shannara following the release of Tolkiens work, but none had an affect quite like this. Fantasy was truly reborn.

Until today this rebirth continues to flourish and the genre is more popular than it ever has been. David Eddings, Margaret Weis and Tracy Hickman, Raymond E. Feist, David Gemmel, Terry Goodkind, Robert Jordan; all bestsellers, the list goes on. As the popularity of fantasy began to grow rapidly, the film and television industry climbed aboard the bandwagon. During the eighties, the fantasy/adventure movie was born. Conan, starring Arnold Schwarzenegger, is a cult classic to this day, as is Willow, a story of half-lings, trolls, witches, and fairies. Other less memorable films can still be found in video stores. The lack of genuinely decent fantasy movies in the recent past can be blamed on inadequate, substandard special effects.

Basically, our technology at the time could not transport the vision of the writers onto the screen, nor bypass the scrutiny of the audience. It simply was not believable. And for fantasy to make an impact, it has to be as realistic as possible. Alas, in an age of advanced materials, of "post-modern" computer technology, the impossible is no longer a concern. Since the release and popularity of The Lord of the Rings trilogy by and large a masterpiece of cinema screen production rights have been purchased for scores of fantasy novels, from Terry Brooks to Robert Jordan.

The future of fantasy has never looked so assured. Even childrens cinema has had its own successes with the genre through the big screen release of the Harry Potter series, and the classic Peter Pan. The cycle continues, literature, film, theatre, board games, video games; fantasy has even taken to the streets with the return of the medieval fair. Whilst there remains an option to go beyond the reality we know, there will always be Fantasy.