NASA to Seek Gay Astronauts for Mission to Mars

NASA has set a 30-year timeline for when it expects to land on the surface of Mars. However, one particular issue that up till now has been a taboo topic, is the sexual desires of its crew. One potential solution has NASA turning to the gay community.
By Bob C
2007-05-08

This article belongs to Pardon My American column.

NASA has set a 30-year timeline for when it expects to land on the surface of Mars. However, one particular issue which up till now has been a topic of taboo, is the sexual desires of its crew. One potential solution has NASA turning to the gay community.

"There is a decision that is going to have to be made about mixed-sex crews, and there is going to be a lot of debate about it", says Paul Root Wolpe, a bioethicist at the and advisor to NASA.

Sexual urges are sexual urges and they'll need to be handled one way or another- so why not utilize a gay astronaut who, even if he or she was to fool around, ultimately would avoid a pregnancy. 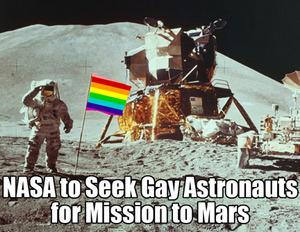 "This could be a great opportunity in gaining further acceptance of the gay lifestyle on a worldwide scale", says Rick Michaels, founder of Homosexuals for Space Exploration (HSE). "Additionally, it would technically place Mars as the first gay-friendly planet."

"An intergalactic gayborhood, essentially", he added, pointing out that he and his partner have been long-time residents of 's gayborhood.

Still dealing with the fallout from astronaut Lisa Nowak's February 2007 arrest for stalking and attempted murder, among other charges involving an astro-love triangle, NASA would need to approach the possibility of relationships among the crew.

NASA has already stated that divas and closet-dwellers will not be accepted into the program.

"All potential candidates must be 'out' and free of primadonna tendencies," says NASA rep Lenny N. Carl.

In addition to the sex issue, NASA must also figure out a way to handle the possibility of death. Previous missions could have an astronaut back on Earth within hours (courtesy of a Russian Soyuz space vehicle) since it was only a 220 mile trip back home, however a mission to Mars would take them 240,000 miles away from their favorite gravitational pull.

The mission to Mars will test the boundaries of human endurance as astronauts will be faced with extended exposure to radiation, the loss of muscle and bone, and the psychological challenges of isolation.

Actually facts used in this fine piece of literature were lifted from:
AP, "NASA Ponders Death and Sex on Mars " WTKR.com
URL: http://www.wtkr.com/Global/story.asp?S=6455886&nav=ZolHbyvj