Rated: R (American rating for strong violence, language, some drug use and sexuality)


Ever since The Matrix was released, Hollywood action films have become
increasingly soaked in CG stunts and Hong Kong inspired wirework, to
the point where something that originally seemed exciting and different
has become stale, trite and unimaginative.

In response to this,
actor Tony Jaa and director Prachya Pinkaew resolved to make a film
unlike any other, which not only showcased Thailand's national martial
art, Muay Thai, but did so in an exciting, visceral fashion. The result
was Ong-Bak, a film where all the stunts are done onset and in-camera.
Tony Jaa prepared for this film years in advance, training extensively
in order to be able to do all the stunts himself, and it pays off. Not
in years has there been a film so stunning to watch simply for the
choreography of its action sequences. What makes it even more
impressive is the lack of technical assistance used to achieve
everything; no wirework, no doubles. What you see is what you get in
this example of guerrilla movie-making. 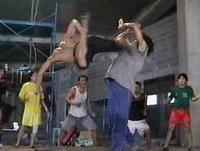 Sure, the storyline is incredibly rudimentary, with Jaa's character
Ting being sent from his small village into the city so that he can
find the stolen head of the village's Buddha statue. The plot, however,
isn't the point here. The story and the characters are kept basic so as
not to complicate things, because who wants to focus on stuff like that
when you have to film a scene where the lead actor is kicking guys in
the face while his legs are on fire? 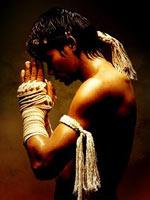 Muay Thai is a pretty brutal sport. I've seen so for myself, having
worked as a spotlight operator at a Muay Thai tournament (don't ask me
how that one came about). The fighters who participate in the sport are
highly disciplined, and have incredibly high thresholds for pain. For
the most part, it's not as showy a fighting style as kung fu or karate,
but many argue that it's one of the most effective styles there is, and
so it's interesting to finally see it get some real screen time in a
film. Jaa's fighting style is just like his stuntwork; flawless,
breathtaking and, quite often, wince-inducing.

So before the
sequel comes out, you might want to check out Ong-Bak. You just don't
see films of this nature coming out of Hollywood. At least, not yet you
do.

Next time: Stretch your wings, we're flying to Brazil.