Genre: Drama / Music / Once again, another head trip of a movie.


I find it hard to believe that it's taken me over forty instalments of
Masterpiece Cinema' to finally get around to covering Pink Floyd The
Wall'. When I first saw it a number of years ago, it unfolded before me
like a revelation. I found the layers of meaning and interpretation in
it fascinating, and its visual style to be original and striking.
Making a surrealist film that's also enjoyable to watch is an
extraordinarily difficult thing; they often turn out like those dreams
you have that are so vivid and disconcerting that all you want to do is
wake up. And sure, Pink Floyd The Wall' has an element of that to it.
You're more than just a little glad when it endsbut the trip you've
had getting to that point has been a remarkable one.

It's
actually kind of dorky to admit to being a Pink Floyd fan these days.
I'm not entirely sure why that is, though I have a couple of theories.
One is that modern rock snobs don't care for the band's artistic
posturing, nor the success that it found despite said posturing. In
simpler terms, rock critics think Floyd is a bunch of wankersand they
have a point. The other theory I have is simply that today's generation
is railing against one of the bands that their parents' generation
found so incredibly enthralling, which is fair enough. One of the
integral elements of rock has always been its rejection of what your
parents find decent and acceptable.

Of course, with that
rejection comes a certain amount of throwing the baby out with the
bathwater'. I've been a fan of Pink Floyd since listening to their
stuff in high school, as stereotypical as it may be. Specifically, I
find The Wall' to be one of the greater artistic achievements in
recent decades. Though it tells a simple story of a rock star's mental
breakdown and elevating isolation, it does it with intelligence,
insight and creativity. The filmic adaptation, released in 1982 and
starring Bob Geldof, is no exception. In fact, it even adds dimensions
to the story, making it not so much a recreation of the experience of
the album, but an almost complete reinvention of it. 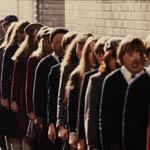 Writer Roger Waters and director Alan Parker apparently came to major
blows over the course of the production, with Parker dismissing the
movie as "the most expensive student film ever made". Parker's comment,
meant to be a derisive one, was actually a fairly accurate assessment
of the work. It's so unlike anything Hollywood tends to produce; so
unstable, so unsafe. But what Parker failed to see was that that's
exactly where the movie's strength lies.

It is, in a way, a
great deal like Alice in Wonderland'; it's a strange, dark trip into a
nightmare realm, a place where reality is splintered and reflected back
at you in a distorted, but still potent, way. It's a film that finds
its greatest strength in how absurd it is, and it's definitely one that
deserves your attention.

Next week: Some action.