No bookings!
By Andy Martello
2004-12-17
Not too long ago I told you a few reasons why I no longer take bookings as Santa Claus and I promised to reveal more as we came closer to Christmas. Well kids, I'm about to make good on my promise.

We
all know that a Santa can find work at corporate holiday parties and
malls, but did you know that one of the most common Santa bookings is
the personal in-home visit? It was news to me but I accepted the work.

To
put it honestly, in-home Santa visits are extremely creepy. When I've
done in-home appearances as myself everyone knew who I was; I wasn't
hiding under any sort of disguise. The person you saw performing was
the same person you'd see walking down the street. That being said, I
would upon occasion be met with a little trepidation from the clients
since they were bringing a total stranger into their home. I frequently
gave references or sent along promotional photos in order to put the
clients at ease. 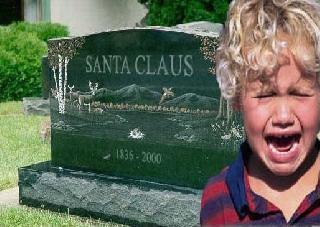 Never Ruin the MystiqueAs Santa, you NEVER
have to let the client see who you are. Nobody wants to ruin the Santa
mystique, so you arrive at the home as Santa Claus. The kids treat you
like a celebrity and never question why you used the front door instead
of the chimney. The parents NEVER gave a second thought to
having some anonymous man show up in a Santa suit, roam through their
house, play with their children and encourage them to sit on your lap.
Why? Because it is Santa! Why would Santa ever be anything but
wholesome and pure? I'd worked entire events having never shown my true
identity to the client.

This struck me as a very suspicious thing. Nobody ever asked for references for Santa bookings. There are MANY people out there that only work as Santa during the holidays. These guys COULD be professional entertainers or they COULD
be jewel thieves and child molesters. Nobody ever questioned the guy
playing Santa and I always saw potential for some bad shit to come
flying my way.

As an example, I offer you a very common practice when people book a Santa for their homes.

Very
often I was showing up at a Christmas party to lead the folks in some
Christmas carols, get wish lists from kids, be offered GALLONS
of alcohol by the hosts (which is cool...but somehow even creepier),
and hand out a few presents to the kids and the guests. Where did these
presents come from? That's the part that made me nervous.

The
presents were all purchased and wrapped in advance by the client, as
you would expect. How did I get them? They'd be left in specific
locations and I'd be given instructions on how & where to find
them. Sometimes they'd be in an open garage. Other times they'd be in
the back seat of the client's unlocked car. Occasionally I'd have to
wander towards the back door of the house and pick them up on the porch
or simply walk into their unlocked house, get packages from the closet
or basement, and come back to make my entrance. Do you see the
potential for a shit storm yet? 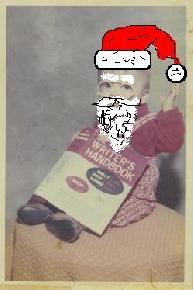 To make things worse, I'd occasionally have to get KEYS to their homes and pick up the packages in advance of the event when the family was out of the house!
You heard me. They'd give me the keys and insist that I show up at a
time when they were sure to be gone, and hope I take their presents to
my home.

I've had to sneak around in alleys, open garbage cans,
break into cars, garages, and the like, often while wearing a Santa
suit. Why on Earth would ANYONE trust a total stranger with their homes and possessions in such a manner? Because I was SANTA!

Were
I a dishonest man, I could have given the client a phony name and been
using some dummy phone number as a contact number. They've never seen
me nor met me, so why would I have to do much more to keep my identity
secret? I could have easily walked away with hundreds of thousands of
dollars worth of merchandise, heirlooms, and jewels and nobody would
have even known what hit them. Of course, I was not a dishonest man and
I gave them my real name, real phone number, and would try to meet the
clients beforehand to avoid conflict.

Of course, even these practices were no guarantee against my own personal holiday nightmares.

Since
so many packages were hidden in so many unlocked places, it became just
as easy for someone else - ANYONE else - to walk off with all the
holiday goodies, jewels, and so on. Had this happened, do you suppose
they'd call the police and conduct a thorough investigation, or do you
think that they'd simply get the police to come find ME? I did,
after all, know where the presents were, have keys to their homes, etc.
Why would the police have to try and find a real thief when they have
the perfect suspect waiting in the wings?

The whole concept made
my hair stand on end as I worried about the what-ifs. I didn't like the
blind trust afforded by a simple Santa suit and I liked even less the
potential for heaping buckets of shit poured upon me should someone
decide to steal Christmas from one of these homes.

You would
think this trust would have gone away all these years later. With all
the stories about bad people during the post 9/11 years and the
degradation of society in general, you'd assume that maybe I could jump
back into the Santa game and do personal appearances if I wanted to do
so. Surely, nobody would be so careless when hiring a performer these
days. Well, you'd be wrong to think this. 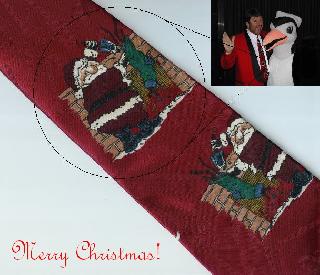 Every
year I get requests from people wondering if I'd be willing to do work
as a Santa for their home. Every year I get the details out of
curiosity and find out that Santa can do no wrong. I'm often told, "all you have to do to find the presents is take the key to the house which is found under the mat...".

To read more Tales from Andy Land or to comment about this article, head on over to Andy's BLOG.