The Evolution of a Michael Jackson Joke

By Andy Martello
2004-05-21
Working in comedy is often frustrating because the jokes I tell are
parts of a much larger act and follow a certain theme. Comedians
generally do not make a living telling the type of did you hear the one
about the guy jokes often told by the amateur humorists (civilians, or
non-coms, as I like to call them). However, whenever I tell someone I
am a comedian, they immediately want me to say something funny or tell
them a joke from my act. Since the jokes may not be all that funny out
of context, I try and brush off the request, making me seem extremely
unfunny. Realizing I look like a total stiff, I try to briefly set up a
joke, take a snippet from my actand then appear even less humor-filled
when the joke bombs outside the confines of my larger routine. Over the
years, Ive taken to trying to remember a water cooler joke or two and
hope they foot the bill. Since I dont really know that many common
jokes, I tend to repeat the latest joke that someone has told me. These
days, they are Michael Jackson jokes. 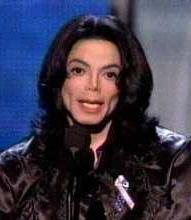 Michael
Jackson, King of "Pop"With the recent indictment of pop superstar
Michael Jackson, comes the inevitable barrage of Michael Jackson jokes.
Virtually anyone with an e-mail account is likely to be forwarded the
latest and lamest of these little gems. These jokes, as well as most
other jibes of traditionally bad taste, come to us courtesy of that one
friend we have who takes it upon himself to forward the joke to every
living soul in his address book.

I dont know why a bad and
predictable joke about someone elses misfortune must make the rounds of
office e-mails, truck stops and the Playboy Joke Page. Occasionally
these jokes are quite funny. Most of the time they just make you groan.
One thing is common among them: they all end up being told to ME!

I
got to thinking about jokes for the common man. Nobody ever claims
authorship of these types of jokes. I can attribute any number of
scenarios and punch lines to any number of well-known comics, and yet,
nobody knows the origins of the types of jokes most often told around
the world. While I cannot boast any knowledge as to the authorship of
the Michael Jackson joke, I can give a little insight as to HOW they
are created. Using my years as a comedy writer and performer, I will
now take you through the creative process and shed some light upon the
evolution of the Michael Jackson joke. I will take 10 commonly heard
Michael Jackson jokes, culled from a randomly chosen website and show
you the dramatic transformation of the joke from first draft (not
funny) to its final incarnation (BRILLIANT!)

MEGA-DISCLAIMER:
All charges against Mr. Jackson are all alleged and have not been
proven in a court of law. It is not the opinion of The Cheers, its
owners, journalists and staff, myself, the keepers of the Internet,
God, Martha Stewart, Oprah, Berkeley Breathed or anyone else that may
be involved with any aspect of life as we know it that Mr. Jackson has
done anything wrong at all. We are all in agreement that he should give
back the Lennon/McCartney tunes, but as for allegations about the
criminal molestation of children, we are as baffled about it as anyone.
The following is merely a clinical exploration that brings to light the
artistic mindset responsible for such heinous jokes, written by
anonymous cowards. This should not be construed as a presumption of
guilt in any way. I cant help it if there are some sick people out
there writing awful things for websites and morning radio shows. I can
only show you the science behind the process and let you make the
judgments for yourself. Lets begin! 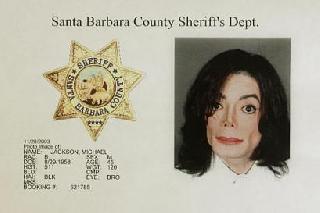 Nope, NOT a Mugshot. No Way!

Nope,
NOT a Mugshot. No Way!In BLUE youll find the FINAL DRAFT of the Michael
Jackson joke, the version youve more than likely heard many times by
now.

In RED, the FIRST DRAFT of the same joke. Note how the
joke evolves and develops for maximum comedic effect. It could take
months, even years to hone the rough cut of the first draft into the
brilliant, high-concept comedy piece you find in your inbox. I think
youll find that comedy writing is not easy. Maybe youll think twice
about hitting your DELETE button the next time such jokes land on your
screen.

Q: How does Michael Jackson know when it is time for bed?

A: When the big hand touches the little hand.

Q: How does Michael Jackson know when it is time for bed?

A: He thought it was a delivery service

A: He was hoping he could fuck the bejeezus out of them.

Q: Why did Michael Jackson start shopping at Kmart?

Q: Why did Michael Jackson start shopping at Kmart?

A: He heard that was a great place to meet and fuck young boys

Q: Why did Michael Jackson dangle his baby over a balcony?

A: He overheard his wife asking someone to drop the children off a few stories.

Q: Why did Michael Jackson dangle his baby over a balcony?

A: Because he can't fuck a baby. DUH!

Q: How do you know Michael Jackson is having a party?

A: All the tricycles in his driveway.

Q: How do you know Michael Jackson is having a party?

A: Because he's serving cake...and fucking a young boy.

Q: Why does Michael Jackson like children so much?

A: He knows how they feel

Q: Why does Michael Jackson like children so much?

Just shut up kid, so I can fuck you already!

Q: How do we know Michael Jackson is guilty?

A: Several children have fingered him.

Q: How do we know Michael Jackson is guilty?

A: Ummm he fucked all those kids?

Q: How does Michael jackson pick his nose?

A: From a catalogue!

Q: How does Michael Jackson pick his nose?

A: I don't know but I think it involves fucking a 10 year old boy.

Q: Why did the chicken cross the road?

A: I don't know about no chicken, but isn't that Michael Jackson fucking a small boy next to that Llama?

Q: Why did the chicken cross the road?

A: I don't know about no chicken, but isn't that Michael Jackson fucking a small boy next to that Chimp? 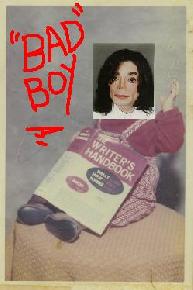 Now
that you see just how difficult it is to create comedic masterpieces
such as these, I am sure you'll be much happier to see the "FWD: MJ
Joke" in your subject line. You might even want to give your annoying
joke-forwarding friend a little token of appreciation. I say, send him
to The Cheers and take this opportunity to brighten his day.

I
leave you now with a joke that hit my inbox during the writing of this
article. Careful examination reveals that this is BOTH the first and
final draft of the joke. I guess some jokes are perfect the first time
they hit the page.

Q: What's the difference between Michael Jackson and Neil Armstrong?

A: One man walked on the moon, the other has sex with 10 year old boys.