An open letter to Pastoral Search Committee or how to get work as a pastor?

Though I would not normally apply for a position like this one, and though I would be reluctant to call it fate, something special drew me to your ad. Let me explain. Last Thursday, I was demonstrating outside the Supreme Court. That was the day atheist Michael Newdow was arguing his case before the nine Court Justices. Mr. Newdow is the man who believes it is unconstitutional for the California school system to require his daughter to recite the Pledge of Allegiance. 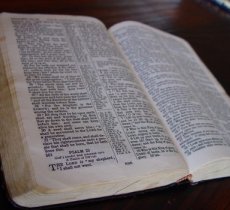 He objects to the the phrase "under God." During my lunch break I came across your ad in the local religious newspaper. Normally I do not read religious publications at lunch. In fact, it is highly unusual for me to read anything while I am eating. But that day, for some mysterious reason, I did. Looking back it almost seems like someone was ordering my life behind the scenes -- if you know what I mean. I'd almost say it was God.

Except for one thing. I am an atheist. Frankly, I began reading your ad with my typical skepticism toward anything religious. But as I reached the end of your ad, something startled me that really took hold of my heart. It was the generosity of your church. I know religious people like yourselves have a reputation for being generous, so I suppose I should not have been surprised. But I guess the ramifications of this concept had never taken hold of me until I noticed the salary you are offering for senior pastor.

It far exceeds my current salary. That is pretty surprising when you consider that I head up the second largest atheist organization on the eastern seaboard. Obviously, I anticipate that we would have a few theological differences to work out. But I have thought long and hard about this, and I am convinced that we can resolve any areas of disagreement. [in]I suppose it will depend to some extent on how strongly you hold to a belief in a literal God. But then again, I have always felt that a wise person never lets his personal beliefs interfere with a good career opportunity. Isn't it the Bible that says, "When in Rome, do as the Romans do?"

A man would have to possess an awfully cold heart to remain untouched by the generosity you are showing. I almost hesitate to mention something else, but it is bound to come up sooner or later. I hope you will find this as funny as I do. You almost certainly remember back in the spring of 1997, when some college students disrupted one of your Sunday morning services? After one man, wearing a rainbow-colored wig, burst into your sanctuary and sprayed water everywhere with a miniature water cannon, another young man splashed white paint all over the front of the church. That second man was me. Did anyone ever let your assistant pastor know that I did not intend to tear his suit coat? Things just got a little more out of hand than I was expecting. I understand the coat was brand new -- and it could not be repaired?

That is such a shame. And I hope the horrible names I called your choir director were taken in the good-natured way I intended. Unfortunately, I have to admit, I struggled with my attitude for quite some time, even after my release from jail. But miraculously (in a manner of speaking) the bitterness just melted away as I read your ad last Thursday. Isn't life funny? I do have one question. Where is a good religious store in the area? Though I am somewhat familiar with a handful of biblical passages, it probably would be good for me to swing by and pick up a copy of Cliff's Notes for The Bible.

Also, I could not tell from your ad when you plan to make a decision. I hope it is no later than three weeks from now. We have another Pledge of Allegiance demonstration scheduled around then, and I want to be sure I know which group to stand with. Blessings (of a sort) to you all.